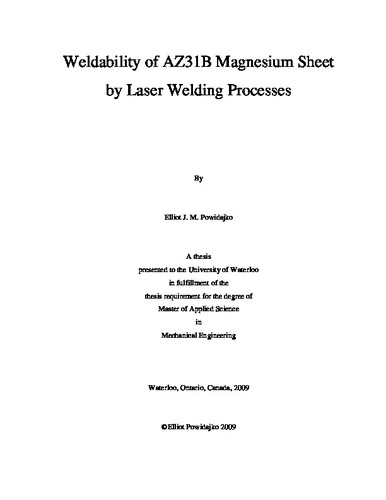 Due to finite fossil fuel resources and the impact on our environment of burning fossil fuels, the automotive industry has been investigating ways to reduce the overall weight of automotive vehicles. This has led to increased interest in ways that light weight alloys such as magnesium can be used in fabrication of automotive parts and manufacturing processes such as welding that would enable increased use of magnesium. The objectives of this project were to characterize and determine the weldability of 2 mm thick AZ31B-H24 magnesium alloy by three different laser beam welding processes: a 4 kW Nuvonyx ISL-4000L high power diode laser, a 5 kW Trump TLC-1005 CO2 laser, and a 10 kW YLR-10000-WC fibre laser. The diode laser operated with a 0.9 by 12 mm spot size and with a maximum power density of 37 MW/m2. Due to its low power density, the diode laser was restricted to conduction-mode welding which produced wide fusion zones. The AZ31B magnesium laser welds exhibited a number of defects including hydrogen porosity, solidification cracking, liquation cracking, high vaporization rates, molten expulsions, and poor weld bead quality due to low surface tension. It was found that the majority of these defects could be controlled through the proper use of clamping and shielding of the weld pool and joint preparation and surface cleaning prior to welding. The as-received base material was delivered with a dark grey hydrated oxide layer. This surface condition was found to increase the overall diode laser beam absorption but was detrimental to the welding process when disrupted. When incorporated into the weld pool, the oxide created weak facets where solidification cracks would initiate or acted to localize strain during tensile testing. Proper joint preparation was required to produce a high quality diode laser weld: machining of the joint interface to remove interfacial gaps, chemical cleaning with acetone and ethanol to remove residual oils or grease, and stainless steel wire brushing to remove the oxide. Diode laser welds made using 3 kW power and 0.75 m/min welding speed achieved approximately 60% of the base metal’s ultimate strength and less than 15% of the base metal ductility. The reduced strength and ductility were attributed primarily to the weld defects which acted as strain localizers during plastic deformation and the lack of strain hardening in the weld metal. Both the CO2 and fibre lasers beams had focal spot sizes of 300 μm diameters and maximum power densities of 70 and 140 GW/m2, respectively. At these power densities, the CO2 and fibre lasers operated in keyhole-mode and produced welds which had narrower columnated fusion zones. The CO2 laser keyhole-mode welds exhibited keyhole instability and bulk material loss through vaporization that resulted in macro-porosity, under-fill, and generally poor weld bead quality. Welds produced using 5 kW power and 8 m/min welding speeds achieved approximately 70% of the base metal’s ultimate strength. The highest quality fibre laser welds were produced at 2 kW power and 100 mm/s welding speeds. These defect-free welds achieved transverse tensile strengths that were 86% of the base metal’s ultimate strength. The 14% loss of strength was attributed to the difference in temper of the base metal and the weld metal. The base material was received in a half-hard H24 temper and the as solidified weld metal is naturally in the softer F temper. This also resulted in a corresponding 15% reduction in hardness. Failure always occurred in the softened fusion zones of the welded samples where the measured hardness was reduced to an average 60 VHN25 from the base metal’s 75 HVN25. The fibre laser weld samples also experienced the greatest extension of any of the tested welds with a cross head displacement of 30% of the base metal. The extreme reduction in overall cross head displacement was attributed to the lower strength of the fusion zone. This led to strain localization in the transverse tensile specimens and premature failure that occurred prior to plastic deformation of the surrounding base material. Proper joint preparation was found to be critical when laser welding AZ31B magnesium sheet. Machined interfaces were required to minimize the gap and degreasing and stainless steel wire brushing were required for removal of the pre-existing hydrated oxide in order to produce sound laser welds. Helium shielding gas was found to improve the weld bead surface quality compared to argon. The keyhole-mode welds produced with the CO2 and fibre lasers were superior compared to the conduction-mode welds produced with the diode laser. This was due to the narrower fusion zone and reduced bulk material loss. Of the three laser welding processes examined in this study, the fibre laser produced the highest quality, strongest, and most ductile welds when analyzed in transverse tensile testing. However, direct comparisons between the CO2 and fibre laser welds could not be made because they were made using different joint preparations and welding conditions.