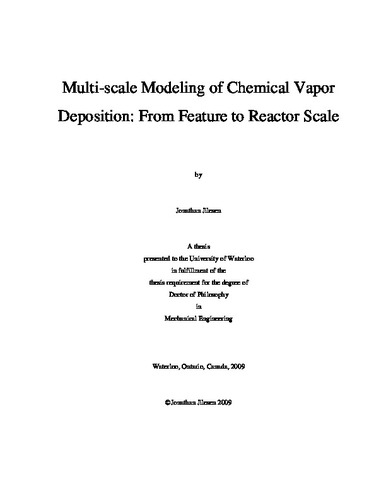 Multi-scale modeling of chemical vapor deposition (CVD) is a very broad topic because a large number of physical processes affect the quality and speed of film deposition. These processes have different length scales associated with them creating the need for a multi-scale model. The three main scales of importance to the modeling of CVD are the reactor scale, the feature scale, and the atomic scale. The reactor scale ranges from meters to millimeters and is called the reactor scale because it corresponds with the scale of the reactor geometry. The micrometer scale is labeled as the feature scale in this study because this is the scale related to the feature geometries. However, this is also the scale at which grain boundaries and surface quality can be discussed. The final scale of importance to the CVD process is the atomic scale. The focus of this study is on the reactor and feature scales with special focus on the coupling between these two scales. Currently there are two main methods of coupling between the reactor and feature scales. The first method is mainly applied when a modified line of sight feature scale model is used, with coupling occurring through a mass balance performed at the wafer surface. The second method is only applicable to Monte Carlo based feature scale models. Coupling in this second method is accomplished through a mass balance performed at a plane offset from the surface. During this study a means of using an offset plane to couple a continuum based reactor/meso scale model to a modified line of sight feature scale model was developed. This new model is then applied to several test cases and compared with the surface coupling method. In order to facilitate coupling at an offset plane a new feature scale model called the Ballistic Transport with Local Sticking Factors (BTLSF) was developed. The BTLSF model uses a source plane instead of a hemispherical source to calculate the initial deposition flux arriving from the source volume. The advantage of using a source plane is that it can be made to be the same plane as the coupling plane. The presence of only one interface between the feature and reactor/meso scales simplifies coupling. Modifications were also made to the surface coupling method to allow it to model non-uniform patterned features. Comparison of the two coupling methods showed that they produced similar results with a maximum of 4.6% percent difference in their effective growth rate maps. However, the shapes of individual effective reactivity functions produced by the offset coupling method are more realistic, without the step functions present in the effective reactivity functions of the surface coupling method. Also the cell size of the continuum based component of the multi-scale model was shown to be limited when the surface coupling method was used. Thanks to the work done in this study researchers using a modified line of sight feature scale model now have a choice of using either a surface or an offset coupling method to link their reactor/meso and feature scales. Furthermore, the comparative study of these two methods in this thesis highlights the differences between the two methods allowing their selection to be an informed decision.