Switching Focus in New Business Enterprise:From a Survival to a Profit Orientation 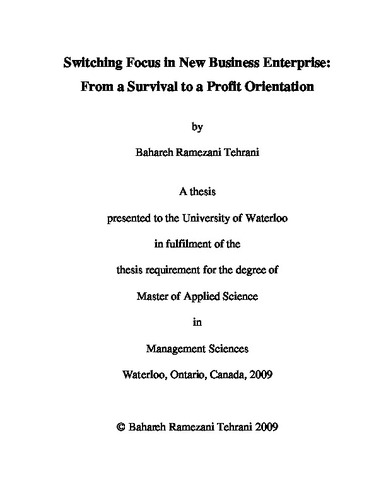 What objective should an entrepreneur focus on when starting a new business enterprise? Both a survival orientation and a profit one are important for the continuity of the new venture, but a survival focus is key in the hazardous early months or even years. In this thesis, I identify the conditions under which an entrepreneur should switch from a survival orientation, where the venture’s likelihood of survival is more critical, to a profit orientation where the venture’s profit instead is more critical. I accomplish this task by determining the optimal time to switch from a survival to a profit orientation based on maximizing the entrepreneur’s accumulated utility over a given time horizon. At each time period, the utility is positively associated with the amount of added value to the business venture that entrepreneur owns and manages, and the time horizon is determined by the time at which the entrepreneur’s venture exit – for instance, it is being sold. That added value contains a planned portion (e.g., due to what the entrepreneur can control) and an unplanned portion. The portion of a firm’s added value that is unplanned depends on the entrepreneur’s orientation, whereby, at any time period, the expected added value and its variation are considered to be low under a survival orientation, but they are considered to be high under a profit orientation. I use an approach from the economics literature, known as the LEN model, where the use of an exponential utility function (E), a linear relationship between the utility and random effects (L), and normality of those random effects (N) allow me to transfer the probabilistic objective function into a certainty equivalent that makes the problem tractable. The decision framework and its resulting findings suggest two environmental and two entrepreneurial characteristics that influence the existence of a time at which to switch orientation from survival to profit. Based on these characteristics, I derive sixteen scenarios and discussed some of the necessary conditions for the existence of a switching time. I find that it is not straightforward to determine whether the orientation switch should be delayed or expedited as business environments (or entrepreneurial types) are compared. I thus further develop my analysis by adding more structure to the functional forms that underline the behavior of how the mean of and variation in the firm’s added value are regulated over time, as well as for the risk propensity of the firm’s owner. This exercise allow me to study the conditions under which the switching time should be delayed or expedited, and to numerically investigate the behavior of a firm’s total valuation as changes occur in key model parameters. I use franchising as an application of the sensitivity analysis I perform to identify whether a change in a model parameter (everything else being equal) should delay or expedite the orientation switch. Based on this application, I would advise entrepreneurs to switch their orientation later if they go into entrepreneurship as a franchisee rather than as a franchisor. A simulation analysis allows me to further propose a positive relationship between a firm’s total valuation and the planned added value by the entrepreneur to that firm. That analysis also suggests a positive relationship between a firm’s total valuation and the expected unplanned-added-value growth under a profit orientation, but a negative relationship under a survival orientation. Further, I find a positive relationship between total valuation and the variation in unplanned-added-value growth under a survival orientation, but a negative relationship under a profit orientation. One of the key challenges that have been raised for future entrepreneurship research is how to define an entrepreneur’s objective function. My thesis contributes to this debate by suggesting that, in the early years, there should be an orientation switch, that is, sequentially as opposed to simultaneously consider both survival and profit maximization. My thesis also contributes to the literature on firm growth because using risk-return tradeoffs to characterize the two orientations is unique in the entrepreneurial context, and so is the consideration of a sequential use of these orientations to study firm added value over time and the resulting accumulated total valuation. Characterizing each of the two orientations – survival and profit – based on risk-return tradeoffs and linking these orientations to firm growth open up new avenues for research in entrepreneurial decision making.