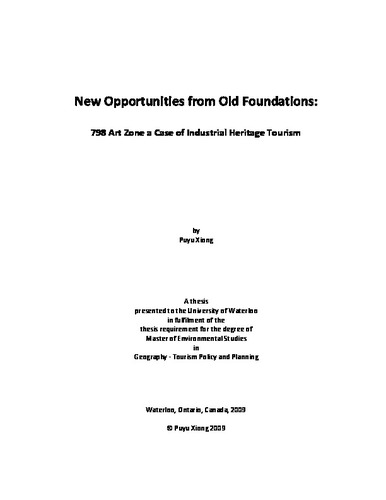 Industrial remains can be found in many regions that experienced industrialization. However, they are, in general, at risk of loss through destruction and abandonment. Promoting tourism can be a helpful tool for regional restructuring and economic development. The creative economy is also emerging as a powerful tool for reinvigorating economic growth, employment and social cohesion of those areas, which may affect the development of touristic activities and industries. However, little research has been done to link creative economy theory and industrial heritage tourism. This paper elaborates on and clarifies the link between industrial heritage tourism and creative economy, and illustrates the impact of creativity and the driving role of the creative class in industrial heritage tourism through a case study. The study site, 798 art zone, is a newly emerged tourism destination in China which developed based on an abandoned soviet-style factory. Through analyzing the initiation status of tourism development in the factory, the interests of visitors, the influences of tourism, and the role of artists, the research reveals the dramatic change under the impact of tourism and more recently added development boom that has taken place at the 798 art zone. The findings identify the characteristics of 798 art zone in different periods and the contributions of the artist community to the art zone. Unlike most industrial heritage tourism sites, the development of 798 art zone was bottom up owing to the creativity of artists. With their creative eyes, artists identified the special features of the abandoned factory (high ceilings, historic design, open spaces, and abundant natural light), and used their creativity to add artistic feelings to this area. When the factory was facing the fate of being razed, they pulled together. With their efforts, the factory was preserved and 798 art zone was acknowledged by the government. The results are in accord with the creative economy theory that creativity is the driving force of economic development and improve the understanding of how creativity and tourism interact. The development pattern of 798 art zone might not apply precisely to any other places in the world, but it provides an effective alternative model for revitalization of old industrial sites as well as other tourism sites. Some management related suggestions and concerns about 798 art zone and tourists profile are proposed. Both practical implications and academic insights are presented based on the major findings of this study.