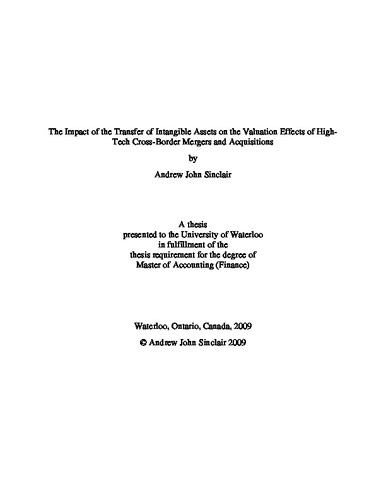 The technology industry is characterized by a greater than usual reliance on intangible assets. During the tech bubble many firms were valued entirely on intangible assets and growth prospects. In the aftermath of the bubble, intangible assets still play an important role as the innovative performance of a firm’s human capital and the value of its patents creates much of the value of high-tech firms. The problem of transferring human capital and knowledge may be further exacerbated when the firms belong to separate national cultures. Investor perception of acquisition announcements may be more favourable if the target workforce is much smaller relative to the bidder, and thus easier to integrate. Also, perceptions may be favourable when the target has a high ratio of intangible assets to total assets, as this may be a proxy for the relative value of the extractible intangible assets. This study uses a sample of 61 acquisition announcements between 1991 and 2004, where both acquirer and target are high-tech firms and accounting and trading data is available from three years prior to three years after the acquisition announcement. There is weak evidence to support the employee ratio hypothesis for bidder returns, and no evidence to support the intangible assets to total assets hypothesis for either bidder or target returns. Additionally, it is found that average bidder abnormal returns during the announcement period (as measured from one day prior to the announcement acquisitions to one day afterwards) are negative but not significantly different from zero, and that average target abnormal returns are positive and significant. Average wealth gains to bidders are negative and to targets are positive over the window from five days prior to the acquisition announcement to five days afterwards. Furthermore, combined wealth gains are negative, indicating the synergistic gains from high-tech cross-border acquisitions are offset by high premiums paid by the bidders for the targets. Relatedness, a lack of tender offers, and non-US acquirer status are demonstrated to be related to negative returns to bidders, whereas tender offers, US-acquirer status, and termination provisions are shown to be related to increased returns to target shareholders. In the long-run, it is found that acquirers experience superior operating cash flow returns when compared to their industry peers, however, the acquirer experiences diminished performance when compared to the combined performance of the pre-acquisition acquirer and target firms.

Andrew John Sinclair (2009). The Impact of the Transfer of Intangible Assets on the Valuation Effects of High-Tech Cross-Border Mergers and Acquisitions. UWSpace. http://hdl.handle.net/10012/4696