Design and Development of a Dynamic Knee Injury Simulator 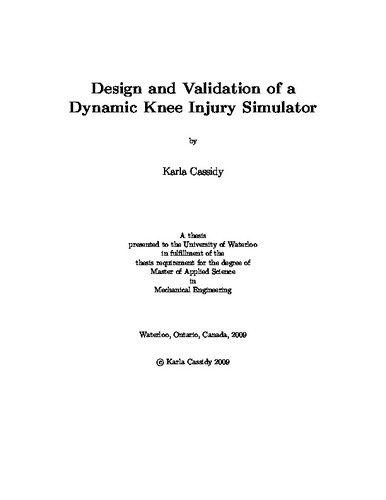 The knee is one of the most complex joints in the body, relying entirely on ligaments and muscles for stabilization. With the rise in people participating in sports, including a significant increase in female athletes, the prevalence of anterior cruciate ligament (ACL) injuries is very evident. With recent research showing that ACL injuries lead to osteoarthritis 10-20 years after the injury, determining the cause of these injuries to be able to prevent them is crucial. To date, both in-vivo and in-vitro techniques have been used to analyze the influences of the ACL injury including neuromuscular, anatomical, and kinematic. In-vivo techniques used to investigate knee kinematics is limited by the inability to take real ACL strain measurements while in-vitro techniques used to investigate anatomical considerations is limited by the inability to apply true muscular and kinematic forces. The purpose of the present thesis is to show the design and validation of a dynamic knee injury simulator. The simulator puts a cadaver knee, original ligaments and patellar tendon still attached, through motions which put the ACL at a high-risk of injury with realistic influence of muscles. The muscular influences are applied with actuators pulling the same force pro les as natural muscles. To get realistic muscle pro files, Anybody Software is used. Anybody Software is a modeling software which puts a skeletal system through prescribed motions and using an optimization algorithm calculates the muscle force pro file. The motion of the knee in the sagittal plane is simulated with actuators. The simulator consists of four actuators which are used in force control mode to add the muscle influence to the knee. Another two belt actuators are used for the joint motions, one each for the hip and ankle. The hip will move along the resultant Z motion and the ankle will move along the resultant Y motion. Simple gait is used for initial validation, the actuators chosen have speed and force capabilities for high-risk motions. The gait was successfully simulated and muscle force versus time profi le tracked the input well. The regression coeffcient study shows very good comparison. The hamstring muscle group is the only one which does not show very good comparison however this is only due to the jumpy nature of the hamstring profi le. The ACL strain fell within a similar range to published gait ACL strain data. The validation was successful, and with greater available force and speeds in the actuators, showing the use of this simulator during high-risk motions is possible.