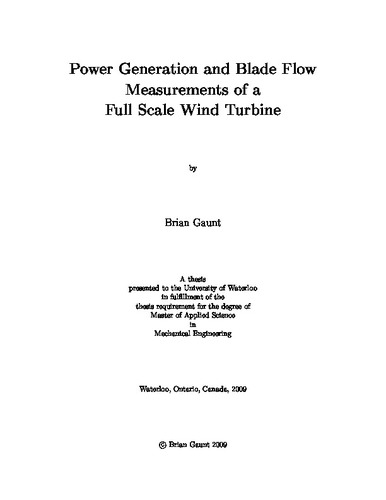 Experimental research has been completed using a custom designed and built 4m diameter wind turbine in a university operated wind facility. The primary goals of turbine testing were to determine the power production of the turbine and to apply the particle image velocimetry (PIV) technique to produce flow visualization images and velocity vector maps near the tip of a blade. These tests were completed over a wide range of wind speeds and turbine blade rotational speeds. This testing was also designed to be a preliminary study of the potential for future research using the turbine apparatus and to outline it's limitations. The goals and results of other large scale turbine tests are also briefly discussed with a comparison outlining the unique aspects of the experiment outlined in this thesis. Power production tests were completed covering a range of mean wind speeds, 6.4 m/s to 11.1 m/s nominal, and rotational rates, 40 rpm to 220 rpm. This testing allowed the total power produced by the blades to be determined as a function of input wind speed, as traditionally found in power curves for commercial turbines. The coefficient of power, Cp, was determined as a function of the tip speed ratio which gave insight into the peak power production of the experimental turbine. It was found, as expected, that the largest power production occurred at the highest input wind speed, 11.1 m/s, and reached a mean value of 3080 W at a rotational rate of 220 rpm. Peak Cp was also found, as a function of the tip speed ratio, to approach 0.4 at the maximum measurable tip speed ratio of 8. Blade element momentum (BEM) theory was also implemented as an aerodynamic power and force prediction tool for the given turbine apparatus. Comparisons between the predictions and experimental results were made with a focus on the Cp power curve to verify the accuracy of the initial model. Although the initial predictions, based on lift and drag curves found in Abbot and Von Doenhoff (1959), were similar to experimental results at high tip speed ratios an extrapolation of the data given by Hoffman et al. (1996) was found to more closely match the experimental results over the full range of tip speed ratios. Finally PIV was used to produce flow visualization images and corresponding velocity maps of the chord-wise air flow over an area at a radius ratio of 0.9, near the tip of a blade. This technique provided insight into the flow over a blade at three different tip speed ratios, 4, 6 and 8, over a range of wind speeds and rotational rates. A discussion of the unique aspects and challenges encountered using the PIV technique is presented including: measuring an unbounded external flow on a rotating object and the turbulence in the free stream affecting the uniform seeding and stability of the flow.