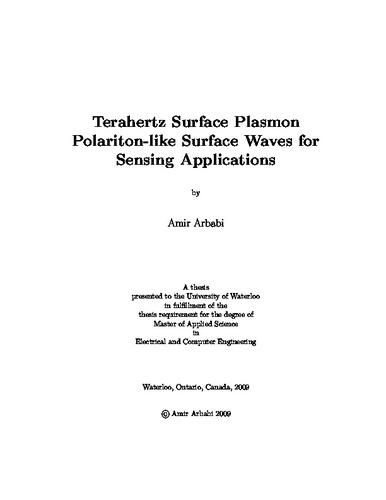 Surface plasmon polaritons are electromagnetic surface waves coupled to electron plasma oscillation of metals at a metal-dielectric interface. At optical frequencies, these modes are of great interest because of their high confinement to a metal-dielectric interface. Due to the field enhancement at the interface, they have been used in different applications such as sensors, second harmonic generation and enhanced Raman scattering. Surface plasmon resonance based sensors are being used for detection of molecular adsorption such as DNA and proteins. These sensors are known to be highly sensitive and have successfully become commercialized. Terahertz (THz) frequency band of electromagnetic spectrum has attracted researchers in the last few years mostly because of sensing and imaging applications. Many important chemical and biological molecules have their vibrational and rotational resonance frequencies in the THz range that makes the THz sensing one of the most important applications of THz technology. Considering above mentioned facts, extending the concept of surface plasmon sensors to THz frequencies can result in sensitive sensors. In this work the possibility of this extension has been investigated. After reviewing optical surface plasmon polariton waves and a basic sensor configuration, surface plasmon polariton waves propagating on at metallic and doped semiconductor surfaces have been examined for this purpose. It has been shown that these waves on metallic surfaces are loosely confined to the metal-dielectric interface and doped semiconductors are also too lossy and cannot meet the requirements for sensing applications. Afterwards, it is shown that periodically patterned metallic surfaces can guide surface waves that resemble surface plasmon polariton waves. A periodically patterned metallic surface is used to guide THz surface plasmon polariton-like surface waves and a highly sensitive sensor is proposed based on that. The quasi-optical continuous wave (CW) THz radiation is coupled to this structure using the Otto's attenuated total reflection (ATR) configuration and the sensitivity of the device is discussed. A general scattering parameter based model for prism coupling has been proposed and verified. It is shown that a critical coupling condition can happen by changing the gap size between the prim and periodic surface. Details of fabrication of the periodic structure and experimental setup have also been presented.