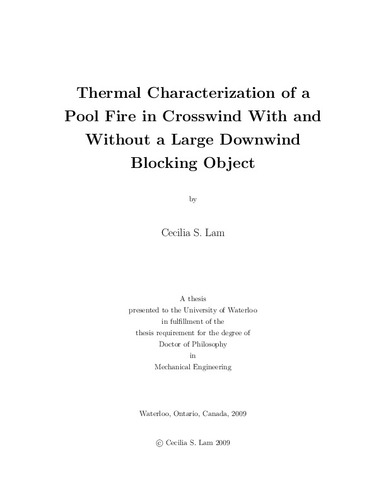 Experiments were conducted to investigate the macroscopic thermal behaviour of 2m diameter Jet A fires in crosswinds of 3m/s to 13m/s. Two scenarios were considered: with and without a 2.7m diameter, 10.8m long, blocking object situated 3.4m downwind of the fire. These scenarios simulated transportation accidents with the fire representing a burning pool of aviation fuel and the object simulating an aircraft fuselage. To date, the limited number of experiments that have been conducted to examine wind effects on fire behaviour have been performed at small scale, which does not fully simulate the physics of large fires, or in outdoor facilities, with poorly controlled wind conditions. This thesis presents the first systematic characterization of the thermal environment in a large, turbulent fire under controlled wind conditions, with and without a large downwind blocking object. In experiments without the object, flame geometry was measured using temperature contour plots and video images, and the results compared to values predicted using published correlations. Results were greatly affected by the method used to measure flame geometry and by differences in boundary conditions between experiments. Although the presence of the blocking object prevented direct measurement of flame geometry due to interaction between the fire plume and object, temperature and heat flux measurements were analyzed to describe overall effects of the object on fire plume development. The fire impinged on the blocking object at wind speeds below 7m/s and interacted with the low-pressure wake region behind the object. Laboratory-scale experiments were also conducted to examine the responses of different heat flux gauges to controlled heating conditions simulating those found in wind-blown fires. Schmidt-Boelter, Gardon and Hemispherical Heat Flux gauges and a Directional Flame Thermometer were exposed to a convective flow and to radiation from a cone calorimeter heater. Measurements were influenced by differences between the calibration and measurement environments, differences in sensor surface temperature, and unaccounted thermal losses from the sensor plate. Heat flux results from the fires were consistent with those from the cone calorimeter, but were additionally affected by differences in location relative to the hot central core of the fire.

Cecilia Lam (2009). Thermal Characterization of a Pool Fire in Crosswind With and Without a Large Downwind Blocking Object. UWSpace. http://hdl.handle.net/10012/4522