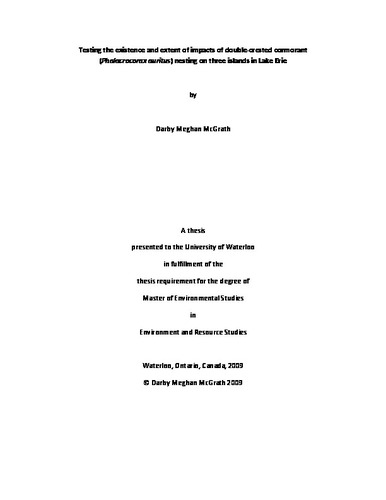 Abstract Managing protected areas requires consideration of broad scale social, ecological and in some cases, political factors. Additionally, the impacts of hyperabundant species is often a concern in protected areas as increases in breeding and foraging pressures can alter habitats dramatically. The influences of hyberabundant nesting colonies of waterbird species are well documented. Many studies indicate that waterbird species can influence canopy species as especially on the shoreline of islands, where the most abundant nesting pressures occur. On Lake Erie, Phalacrocorax auritus populations have increased dramatically from a low of 87 nests in 1979 to 16,050 nests in 2007. However, most studies have failed to address the influences that mature tree death may have on the ground layer ecosystem, including increased litter depth, herbaceous species composition and abundance and seed bank composition and viability. Consequently this study sought to quantify the nesting colonies’ influence on coarse woody litter and how nest densities and litter depth influence the herbaceous layer, the seed bank composition and viability across the extent of three Lake Erie islands. My study was designed to quantify the nesting colonies’ influence on these variables across the extent of each island, rather than just the perimeters where the majority of cormorant nests and visible damage exists. I collected my data in the summer of 2008 on East Sister Island, Middle Island and West Sister Island, using plotless-point quarter method, herbaceous layer surveys (incorporating data collected by Parks Canada and Ontario Parks in 2004 and 2007), cormorant nest counts, soil seed bank cores, and litter depth measurements. To test whether there are specific impacts of cormorant nests relegated to the island perimeters versus the rest of the island, an available subset of data on East Sister Island and Middle Island were used. These were expressed as vegetation ‘damage indices’ as classified by Parks Canada and Ontario Parks staff. Kruskal-Wallis tests were used to determine if the different damage indices reveal any influence of cormorant nest density in smaller localized areas as opposed to testing the entirety of the islands. Kruskal-Wallis tests indicated that, island-wide, none of the herbaceous species abundance, diversity (total, native or exotic), seed bank composition, or seed viability has been affected significantly (P > 0.05) by either cormorant nest numbers or large-diameter litter-fall from cormorant nesting activities. However, damage indices (calculated using aerial photography) did indicate that, P .auritus nest density does influence litter depth, herbaceous species abundance and diversity in the island perimeter. Nest density has not significantly affected seed bank abundance or seed viability. My conclusion is that cormorants do not uniformly affect the islands as there is localized damage to the herbaceous layer, restricted primarily to the perimeters of the islands. However, there remains a risk to the interior herbaceous layer of the island if the effects of nesting pressures at the edges advance inward from this perimeter.