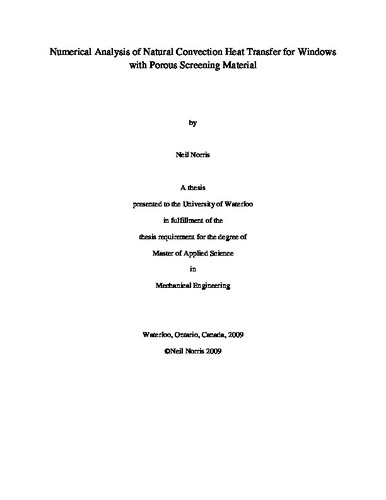 A numerical study of natural convection across a window cavity with an insect screen was performed in order to investigate the effects of changing several variables on the heat transfer through the system. A two-dimensional, laminar model was created using the Computational Fluid Dynamics software FLUENT. The system was approximated by three rectangular zones, the largest representing the open room, a smaller area with an isothermal wall representing the window cavity and a thin area representing the insect screen, which connected the two other zones. The insect screen was assumed to be a porous media with a known pressure drop taken from experimentation and the Darcy-Forchheimer equation was applied to this zone. The factors that were changed in order to examine the effects were two window cavity heights and two widths, five different screen porosities and a variety of window, screen and ambient temperature combinations. The model was compared to analytical solutions for a vertical flat plate, as well as a qualitative analysis done through a simple flow visualization experiment for a midrange porosity of 0.5. It was found that the model matched the analytical solution very well and exhibited the same flow patterns as in the experiment. First a non-heated screen was used, simulating nighttime conditions. Velocity vector and temperature plots were created in order to see the changes in flow patterns as the porosity of the screen was decreased for the various geometries and as the temperature between the window and screen increased. Several flow patterns were observed. For small screen/window spacing, 0.0127m, the flow is fairly uniform for all porosities and follows the entire length of the cavity, slowing in velocity for decreasing porosities. For larger spacing, 0.0254m, there are recirculation zones present, one back up the screen, and one in the bottom corner which causes the flow to exit the cavity before it reaches the bottom. The results were then non-dimensionalized and the heat transfer rates were examined by comparing the local and average Nusselt and Rayleigh number for each model. The results showed the effects of the flow patterns on the heat transfer, with end effects jumping the Nusselt number as the flow navigates the bottom corner. These effects are lessened with decreasing porosity. The average Nusselt number also followed the same trend as flat plate correlations, but with less heat transfer. Finally, a methodology was proposed to approximate the heat transfer as resistor network in order to simplify the heat transfer calculations into a 1-D transfer analysis for building sciences applications. Each element of the system, the window, insect screen and open room, was reduced to an isothermal layer in order to describe the system solely by temperature differences in order to find the heat transfer rates. This final step was done in conjunction with ongoing research at the University of Waterloo Solar Thermal Research Lab.