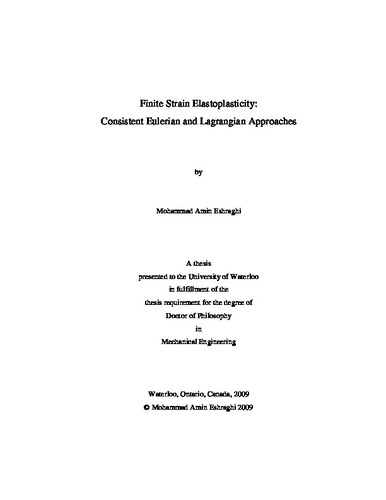 Infinitesimal strain approximation and its additive decomposition into elastic and plastic parts used in phenomenological plasticity models are incapable of predicting the hardening behavior of materials for large strain loading paths. Experimentally observed second-order effect in finite torsional loading of cylindrical bars, known as the Swift effect, as well as deformations involving significant amount of rotations are examples for which infinitesimal models fail to predict the material response accurately. Several different Eulerian and Lagrangian formulations for finite strain elastoplasticity have been proposed based on different decompositions of deformation and their corresponding flow rules. However, issues such as spurious shear oscillation in finite simple shear and elastic dissipation in closed-path loadings as well as elastic ratchetting under cyclic loading have been identified with the classical formulations for finite strain analysis. A unified framework of Eulerian rate-type constitutive models for large strain elastoplasticity is developed here which assigns no preference to the choice of objective corotational rates. A general additive decomposition of arbitrary corotational rate of the Eulerian strain tensor is proposed. Integrability of the model for the elastic part of the deformation is investigated and it is shown that the proposed unified model is consistent with the notion of hyperelasticity for its elastic part. Based on this, the stress power is physically separable into its reversible and irreversible parts using the proposed constitutive model irrespective of the objective rate used in the model. As a result, all of the issues of finite strain elastoplasticity are resolved using the proposed Eulerian rate model for arbitrary corotational rate of stress. A modified multiplicative decomposition of the right stretch tensor is proposed and used to set up a new Lagrangian framework for finite strain elastoplasticity. Decomposition of the deformation is solely defined by the multiplicative decomposition of the total right stretch tensor into its elastic and plastic parts. The flow rule and evolution of the plastic internal variables are based on the Hencky measure of the plastic right stretch tensor instead of the strain rate tensor. As a result, the issue of mismatch between the elastic and plastic parts of the deformation which mostly exists in the classical multiplicative models does not exist in the proposed Lagrangian model. The problem of back stress oscillation observed in the classical Lagrangian models is also resolved using the proposed Lagrangian model and results are identical to those of the proposed unified Eulerian rate model for finite strain elastoplasticity. In the context of nonlinear elasticity, no preference for either Lagrangian or Eulerian formulations exists since the two formulations can be related through proper transformations and are equivalent form of each other in different backgrounds. However, classical Eulerian and Lagrangian models of elastoplasticity do not provide such an equivalency under the same loading path. This is due to different definitions used for the elastic and plastic parts of the deformation and different flow rules used in the classical Eulerian and Lagrangian models. In this research it is shown that both the proposed Lagrangian and unified Eulerian rate models are equivalent and results obtained from both models are identical for the same finite strain loading path. Such an equivalency verifies that the proposed Eulerian and Lagrangian models are unified and transformable to each other. The unified Eulerian and Lagrangian models are extended to mixed nonlinear hardening material behavior. Predicted results for the second-order effect (the well-known Swift effect) are in good agreement with experimental data for fixed-end finite torsional loading of SUS 304 stainless steel tubes. The proposed models are therefore good candidates to be implemented in the displacement-based formulation of the finite element method for the Lagrangian and Eulerian frameworks of finite strain elastoplasticity.