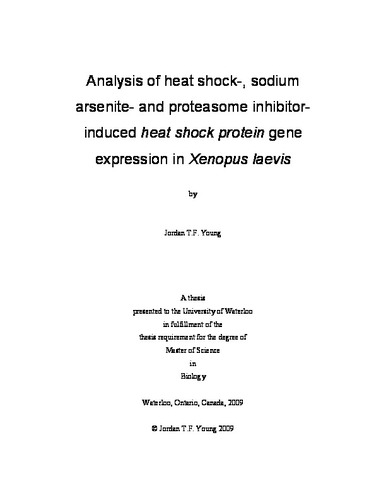 Previous studies have focused on the effect of individual stressors on hsp gene expression in eukaryotic organisms. In the present study, I examined the effect of concurrent low doses of sodium arsenite and mild heat shock temperatures on the expression of hsp30 and hsp70 genes in Xenopus laevis A6 kidney epithelial cells. Northern hybridization and western blot analysis revealed that exposure of A6 cells to 1-10 μM sodium arsenite at a mild heat shock temperature of 30˚C enhanced hsp30 and hsp70 gene expression to a much greater extent than found with either stress individually. In cells treated simultaneously with 10 μM sodium arsenite and different heat shock temperatures, enhanced accumulation of HSP30 and HSP70 protein was first detected at 26˚C with larger responses at 28 and 30 ˚C. HSF1 activity was involved in combined stress-induced hsp gene expression since the HSF1 activation inhibitor, KNK437, inhibited HSP30 and HSP70 accumulation. Immunocytochemical analysis revealed that HSP30 was present in a granular pattern primarily in the cytoplasm in cells treated simultaneously with both stresses. Finally, prior exposure of A6 cells to concurrent sodium arsenite (10 μM ) and heat shock (30 ˚C) treatment conferred thermotolerance since it protected them against a subsequent thermal challenge at 37 ˚C. Acquired thermotolerance was not observed with cells treated with the two mild stresses individually. It is likely that the enhanced accumulation of HSPs under these conditions permits the organism to cope with multiple environmental stresses encountered in their natural aquatic habitat. Previous studies have shown that inhibiting the activity of the proteasome also leads to the accumulation of damaged or unfolded proteins within the cell. In the second phase of this study, I report that inhibition of proteasome activity by the inhibitors carbobenzoxy-L-leucyl-L-leucyl-L-leucinal (MG132) and lactacystin induced the accumulation of HSP30 and HSP70 as well as their respective mRNAs. The accumulation of HSP30 and HSP70 in A6 cells recovering from MG132 exposure was still relatively high 24 h after treatment and it decreased substantially after 48 h. Exposing A6 cells to simultaneous MG132 and mild heat shock enhanced the accumulation of HSP30 and HSP70 to a much greater extent than with each stressor alone. HSP30 localization in A6 cells was primarily in the cytoplasm as revealed by immunocytochemistry. In some A6 cells treated with higher concentrations of MG132 and lactacystin, HSP30 was also found to localize in relatively large cytoplasmic foci. In some MG132-treated cells, HSP30 staining was substantially depleted in the cytoplasmic regions surrounding these foci. The activation of HSF1 may be involved in MG132-induced hsp gene expression in A6 cells since KNK437 inhibited the accumulation of HSP30 and HSP70. Lastly, MG132 treatment also conferred a state of thermotolerance in A6 cells such that they were able to survive a subsequent thermal challenge. Analysis of this phenomenon is important given the fact that impaired proteasomal activity has been suggested as an explanation for some of the late-onset neurodegenerative diseases such as Parkinson’s and Alzheimer’s disease.