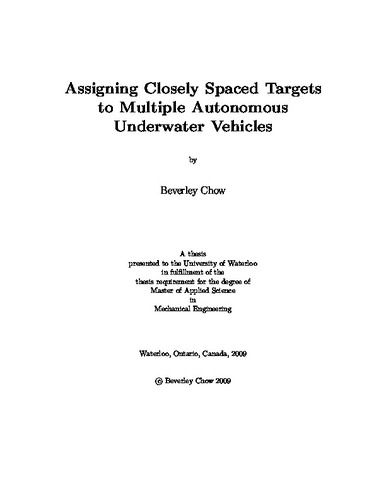 This research addresses the problem of allocating closely spaced targets to multiple autonomous underwater vehicles (AUV) in the presence of constant ocean currents. The main difficulty of this problem is that the non-holonomic vehicles are constrained to move along forward paths with bounded curvatures. The Dubins model is a simple but effective way to handle the kinematic characteristics of AUVs. It gives complete characterization of the optimal paths between two configurations for a vehicle with limited turning radius moving in a plane at constant speed. In the proposed algorithm, Dubins paths are modified to include ocean currents, resulting in paths defined by curves whose radius of curvature is not constant. To determine the time required to follow such paths, an approximate dynamic model of the AUV is queried due to the computational complexity of the full model. The lower order model is built from data obtained from sampling the full model. The full model is used in evaluating the final tour times of the sequences generated by the proposed algorithm to validate the results. The proposed algorithm solves the task allocation problem with market-based auctions that minimize the total travel time to complete the mission. The novelty of the research is the path cost calculation that combines a Dubins model, an AUV dynamic model, and a model of the ocean current. Simulations were conducted in Matlab to illustrate the performance of the proposed algorithm using various number of task points and AUVs. The task points were generated randomly and uniformly close together to highlight the necessity for considering the curvature constraints. For a sufficiently dense set of points, it becomes clear that the ordering of the Euclidean tours are not optimal in the case of the Dubins multiple travelling salesmen problem. This is due to the fact that there is little relationship between the Euclidean and Dubins metrics, especially when the Euclidean distances are small with respect to the turning radius. An algorithm for the Euclidean problem will tend to schedule very close points in a successive order, which can imply long maneuvers for the AUV. This is clearly demonstrated by the numerous loops that become problematic with dense sets of points. The algorithm proposed in this thesis does not rely on the Euclidean solution and therefore, even in the presence of ocean currents, can create paths that are feasible for curvature bound vehicles. Field tests were also conducted on an Iver2 AUV at the Avila Pier in California to validate the performance of the proposed algorithm in real world environments. Missions created based on the sequences generated by the proposed algorithm were conducted to observe the ability of an AUV to follow paths of bounded curvature in the presence of ocean currents. Results show that the proposed algorithm generated paths that were feasible for an AUV to track closely, even in the presence of ocean current.