PID Control of Systems with Hysteresis 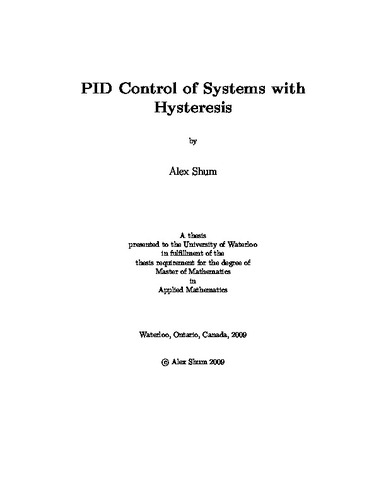 Hysteresis is exhibited by many physical systems. Smart materials such as piezoelectrics, magnetostrictives and shape memory alloys possess useful properties, especially in the field of micropositioning, but the control of these systems is difficult due to the presence of hysteresis. An accurate model is required to predict the behaviour of these systems so that they can be controlled. Several hysteresis models including the backlash, elastic-plastic and Preisach operators are discussed in detail. Several other models are mentioned. Other control methods for this problem are discussed in the form of a literature review. The focus of this thesis is on the PID control of hysteretic systems. In particular, two systems experiencing hysteresis in their controllers are examined. The hysteresis in each system is described by different sets of assumptions. These assumptions are compared and found to be very similar. In the first system, a PI controller is used to track a reference signal. In the second, a PID controller is used to control a second-order system. The stability and tracking of both systems are discussed. An extension is made to the first system to include the dynamics of a first-order system. The results of the second system are verified to hold for a general first-order system. Simulations were performed with the extension to a first-order system using different hysteresis models.