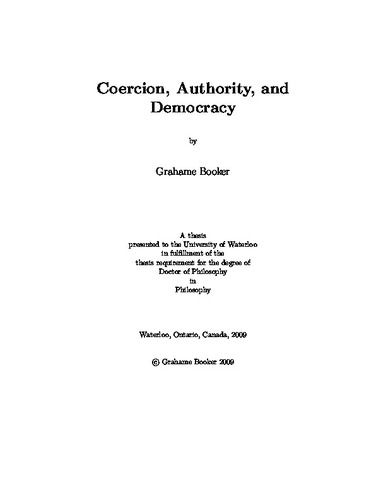 As a classical liberal, or libertarian, I am concerned to advance liberty and minimize coercion. Indeed on this view liberty just is the absence of coercion or costs imposed on others. In order to better understand the notion of coercion I discuss Robert Nozick's classic essay on the subject as well as more recent contributions. I then address the question of whether law is coercive, and respond to Edmundson and others who think that it isn't. Assuming that the law is in fact coercive, there is still a question,as with all coercive acts, as to whether that coercion is justified. Edmundson thinks that this places a special burden on the state of justifying its existence, whereas it simply places the same burden on the state as anyone else. What I reject is the longstanding doctrine of Staatsrason, namely that the state is not subject to the same moral rules as its subjects. With respect to the relation of morality to law, Edmundson thought that another of the fallacies of which philosophical anarchists were guilty was that of assuming that there was a sphere of morality where law had no business. On the contrary, our concern is with spheres of law which appear to have little to do with morality, which is to say laws against wrongs of the malum prohibitum variety, as opposed to wrongs which are malum in se. I then turn to a matter with which Edmundson begins his study, namely how it is that states acquire the authority to do what they do, namely coerce their subjects. While the fact that the philosopher's stone of political obligation has proved rather elusive may mean that a legitimate state lacks the authority to demand obedience pure and simple, Edmundson contends that it can at the very least demand that we do not interfere in the administration of justice. I argue that this attempt to sidestep the justification of the authority of the state fails and that we seem in the end to be having to take the state's word for it that we must do X on pain of penalty P. Nor, as I go on to argue, is it any help to appeal to democracy to remedy a failed justification of the authority of the state. There either is a moral justification of state coercion in order to prevent harm to innocent subjects, or there isn't, and this holds,if it does, not only at the level of individuals, but also at the level of the state, regardless of its constitutional form. After concluding that the attempts of Edmundson and others to refute the anarchic turn in recent political philosophy have failed, it would seem that the withering away of the state foreseen in Marx's eschatology is not as improbable as maybe it once appeared.