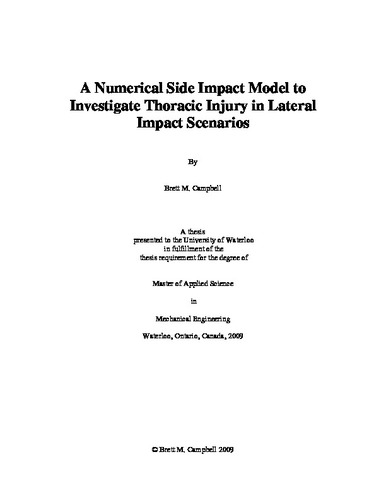 Although there have been tremendous improvements in crash safety there has been an increasing trend in side impact fatalities, rising from 30% to 37% of total fatalities from 1975 to 2004 (NHTSA, 2004). Between 1979 and 2004, 63% of AIS≥4 injuries in side impact resulted from thoracic trauma (NHTSA, 2004). Lateral impact fatalities, although decreasing in absolute numbers, now comprise a larger percentage of total fatalities. Safety features are typically more effective in frontal collisions compared to side impact due to the reduced distance between the occupant and intruding vehicle in side impact collisions. Therefore, an increased understanding of the mechanisms governing side impact injury is necessary in order to improve occupant safety in side impact auto crash. This study builds on an advanced numerical human body model with focus on a detailed thoracic model, which has been validated using available post mortem human subject (PMHS) test data for pendulum and side sled impact tests (Forbes, 2005). Crash conditions were investigated through use of a modified side sled model used to reproduce the key conditions present in full scale crash tests. The model accounts for several important factors that contribute to occupant response based on the literature. These factors are; the relative velocities between the seat and door, the occupant to door distance, the door shape and compliance. The side sled model was validated by reproducing the crash conditions present in FMVSS 214 and IIHS side impact tests and comparing the thoracic compression, velocity, and Viscous Criterion (VC) response determined by the model to the response of the ES-2 dummy used in the crash tests. Injury was predicted by evaluating VCmax, selected for its ability to predict rate-sensitive soft tissue injury during thoracic compression (Lau & Viano, 1986). The Ford Taurus FMVSS 214 and Nissan Maxima IIHS tests were selected from side impact crash test data found in the NHTSA database because they included factors not present in standard side impact test procedures. These factors were; the presence of door accelerometers used to provide input velocities to the side impact model and the use of a ES-2 (rather than the SID) to facilitate comparison of VC response to the human body model. Also, the two crash test procedures (FMVSS 214 & IIHS) were selected to ensure accurate side impact model response to different impact scenarios. The side impact model was shown to closely reproduce the timing and injury response of the full-scale FMVSS 214 side impact test of a Ford Taurus, as well as the IIHS side impact test of a Nissan Maxima. The side impact model was then used to investigate the effects of door to occupant spacing, door velocity profile, armrest height, seat foam, restraint system, and arm position. It was found that the VCmax was controlled by both the first and second peaks typically found in door velocity profiles, but the effect of each varies depending on the situation. This study found that VCmax was reduced by 73-88% when door intrusion was eliminated compared to the VC response incurred by an intruding door. Also, the presence of a deformable door based on physical geometry and material characteristics rather than a simplified rigid door reduced VCmax by 16% in this study. The study on seat foam determined that significant effects on VC response can be made by modest adjustments in foam properties. Low stiffness seat foam was found to increase VCmax by 41% when compared to the VC response when using high stiffness foam. Arm position has been proven to be a relevant factor in side impact crash. Positioning the arms parallel to the thorax, in the “down” position, caused a 42% increase in VCmax when compared to the VC response determined with the arms positioned at 45 degrees. Finally, although restraint systems have limited influence on side impact crash safety compared to front and rear impacts, this study found that the presence of a pre-tensioning restraint system reduced VCmax by 13% when compared to the VC response of an un-belted occupant. It should be noted that the current study was limited to velocity profiles obtained from a specific FMVSS 214 test and therefore results and observations are restricted to the confines of the input conditions used. However, the side impact model developed is a useful tool for evaluating factors influencing side impact and can be used to determine occupant response in any side impact crash scenario when the appropriate input conditions are provided.