Bayesian inference for source determination in the atmospheric environment 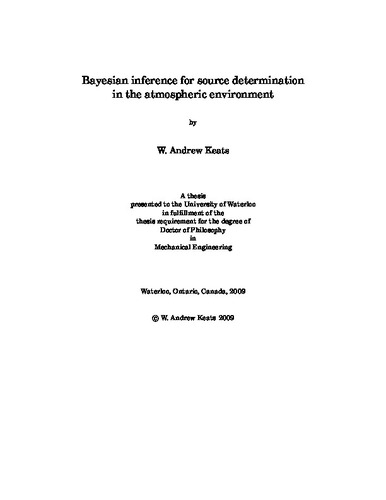 In the event of a hazardous release (chemical, biological, or radiological) in an urban environment, monitoring agencies must have the tools to locate and characterize the source of the emission in order to respond and minimize damage. Given a finite and noisy set of concentration measurements, determining the source location, strength and time of release is an ill-posed inverse problem. We treat this problem using Bayesian inference, a framework under which uncertainties in modelled and measured concentrations can be propagated, in a consistent, rigorous manner, toward a final probabilistic estimate for the source. The Bayesian methodology operates independently of the chosen dispersion model, meaning it can be applied equally well to problems in urban environments, at regional scales, or at global scales. Both Lagrangian stochastic (particle-tracking) and Eulerian (fixed-grid, finite-volume) dispersion models have been used successfully. Calculations are accomplished efficiently by using adjoint (backward) dispersion models, which reduces the computational effort required from calculating one [forward] plume per possible source configuration to calculating one [backward] plume per detector. Markov chain Monte Carlo (MCMC) is used to efficiently sample from the posterior distribution for the source parameters; both the Metropolis-Hastings and hybrid Hamiltonian algorithms are used. In this thesis, four applications falling under the rubric of source determination are addressed: dispersion in highly disturbed flow fields characteristic of built-up (urban) environments; dispersion of a nonconservative scalar over flat terrain in a statistically stationary and horizontally homogeneous (turbulent) wind field; optimal placement of an auxiliary detector using a decision-theoretic approach; and source apportionment of particulate matter (PM) using a chemical mass balance (CMB) receptor model. For the first application, the data sets used to validate the proposed methodology include a water-channel simulation of the near-field dispersion of contaminant plumes in a large array of building-like obstacles (Mock Urban Setting Trial) and a full-scale field experiment (Joint Urban 2003) in Oklahoma City. For the second and third applications, the background wind and terrain conditions are based on those encountered during the Project Prairie Grass field experiment; mean concentration and turbulent scalar flux data are synthesized using a Lagrangian stochastic model where necessary. In the fourth and final application, Bayesian source apportionment results are compared to the US Environmental Protection Agency's standard CMB model using a test case involving PM data from Fresno, California. For each of the applications addressed in this thesis, combining Bayesian inference with appropriate computational techniques results in a computationally efficient methodology for performing source determination.