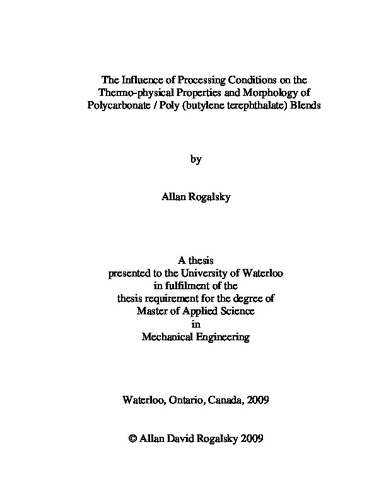 The objective of this work is to determine the effect of four process variables on the properties of blends composed of bisphenol-A polycarbonate (PC) and poly (butylene terephthalate) (PBT) polymers which are compounded using a large scale commercial extruder. The four variables studied are blend composition, specific energy consumption, residence time and shear rate. The last three factors were varied using the extruder screw speed and feed rate. The PC/PBT blends, commercially known as XENOY, were compounded using a WP ZSK 58 mm co-rotating twin screw extruder at the facility of SABIC Innovative Plastics in Cobourg Ontario. The extruder was instrumented to measure online the die pressure, specific energy consumption and blend temperature. The blends were characterized using differential scanning calorimetry, (DSC), scanning electron microscopy, (SEM), gel permeation chromatography, (GPC), and melt volume flow rate, (MVR). After processing, the blend properties determined were melting temperature, glass transition temperature, crystallinity, amorphous phase weight fraction, amorphous phase composition, phase morphology, PBT-rich-phase size, blend molecular weight distribution, and MVR. Using principles available in the literature, a linear regression model was developed to relate the process variables with the online measured properties and output blend properties. Fitting this model allowed the relative importance of each process variable to be estimated for each property. An attempt was also made to identify the general type of PC/PBT blend studied and how it compares with published PC/PBT blend data. It was found that the blends studied were well stabilized since there was no evidence of significant co-polymer formation during processing. Small decreases in molecular weight were attributed to mechanical degradation. Blending increased the crystallization and melting temperatures, as well as blend crystallinity. No practically significant difference in melting temperatures was observed between the different processing conditions. Analysis of glass transitions indicated that the blend components were partially miscible. The amorphous phase compositions were unaffected by blend composition or processing; however, the weight fraction PC-rich-phase present in the blend was strongly influenced by the screw speed. The phase structure of as-extruded blends could not be resolved using the SEM. Therefore, the blends were annealed to coarsen the phases. After annealing, a continuous PC-rich-phase and a discrete PBT-rich-phase were observed. The PBT phase size increased with increasing PBT content. No other statistically significant effects on phase size were observed but this is not conclusive due to the large scatter in the measurements. MVR was primarily influenced by blend composition and specific energy consumption, with the effects of composition being dominant. Further study using higher imaging resolution is required if the phase structures of as received blend pellets are to be characterized. Contrary to current practice, it is recommended that the Utracki-Jukes equation be used rather than the Fox equation for determining amorphous phase composition from glass transition data in PC/PBT blends.