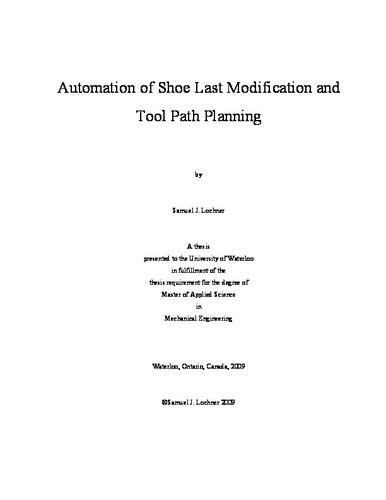 To make mass production of footwear a viable operation for manufacturers and retailers, the number of sizes per model must be optimized. For this reason, manufacturers generally only scale designs by length and width measurements. The human foot, however, is a complex and flexible 3D shape that varies greatly from individual to individual. Slight irregularities or foot deformations will result in ill fitting footwear and over time may result in injuries. Custom made shoes are available however the price is often in excess of $2000 CAN. For the majority of individuals without insurance, this price is not practical. Custom footwear production is expensive primarily because of the challenges of custom shoe last production. A shoe last is basically a model of the foot that has undergone various simplifications and modifications to provide a more aesthetic and functional mold about which to build the shoe whilst maintaining the primary geometrical characteristics of the foot. For custom shoes, a custom last is made for each foot. Techniques for creating a custom last vary greatly. In some cases modern digitizing equipment, computer numerically controlled (CNC) milling machines, computer aided design (CAD) software, and computer aided manufacturing (CAM) software is used to create the last. In other cases, traditional manual techniques are used. It should be expected that modern techniques, due to automation, would require far less skilled labor than traditional techniques; however this is not the case. Clearly the available modern systems must be deficient in some respect. After reviewing the various modern systems available, it was determined that the primary source for skilled labor requirement was the last design software, often taking an operator an hour per custom last to design. The primary problem identified with the software reviewed was lack of automation. Another drawback was that the software did not properly take advantage of the concept of a virtual fit (the foot model is placed inside the last as if trying on the shoe). A third problem was that feet of all types were dealt with in the same manner. This is inadequate because a foot with major deformities will require different tools than a foot that can be adequately fit with simple last measurement adjustments. The focus of this project is to create an improved system for custom last production that addresses the above issues. Tools for adjusting feet to the proper position for fitting in a shoe were provided. Last measurements were made relative to the foot’s critical points to better quantify the quality of fit for a particular foot. Algorithms were created to design lasts automatically for feet that are irregular in measurements but do not exhibit major deformities. For feet that do not fall into this category, lasts are initially designed using the automatic techniques and then manual techniques are provided for further customization as needed. Methods were also developed for creating tool paths to guide CNC milling machines to create the lasts. The system was tested for 3 different feet of similar sizes. In parallel, a custom manufacturer created 3 lasts for the same feet using traditional methods. The automatically modified lasts and the manually modified lasts were compared. Unfortunately, the digitizing methods used to obtain models of the feet were inaccurate. As a result, the automatically modified lasts differed significantly from the manually modified lasts. This comparison aside however, the automatic algorithms achieved their goal of modifying a last such that its measurements matched recommended measurements with an average error of less than 2mm. In conclusion, a shoe last for a foot without major deformities can be modified so that its measurements match those of recommended measurements. As long as the starting last is of an appropriate style for the intended foot, this should (in theory) create a last that can be used to make a shoe that is comfortable and orthopedically appropriate while maintaining the style and smoothness of the original last. The system requires a minimum amount of user input, thus greatly simplifying the last creation process and reducing the price of custom shoe production. The next step is to further test the system for lasts of all sizes and create footwear from the resulting shoe lasts.