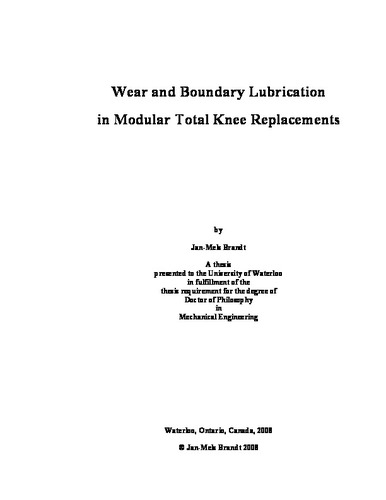 Wear of the polyethylene (PE) bearing surface and wear particle-induced osteolysis (bone resorption) can lead to failure of modular total knee replacements and make expensive revision surgery necessary. Gamma-in-air sterilization of the PE insert and having a modular tibial component are both risk factors for excessive backside wear that contribute to osteolysis and implant failure. The overall wear (backside and topside) of modular total knee replacements has been subjected to considerable research in order to avoid such implant failure. The investigations reported in the present thesis evaluated both the clinical and in vitro wear performance of modular total knee replacements. The clinical investigations included damage assessment of retrieved PE inserts. A semi-quantitative grading method was developed and used to assess backside surface damage on 52 PE inserts retrieved from contemporary total knee replacement surgeries. Statistical analyses, such as univariate and multiple linear regression analysis, were performed to identify factors that influence backside damage including implant design features and patient characteristics. The damage features on the retrieved tibial PE inserts were also assessed with surface characterization techniques, such as scanning electron microscopy, energy dispersive X-ray analysis, and surface profilometry. To reduce surface damage and thus wear, PE inserts should be either gas-plasma or ethylene-oxide sterilized, used with polished tibial trays and held in place with a partial-peripheral locking mechanism. Synovial fluid samples were aspirated from a total of twenty patients and some basic biochemical analyses were performed. The total protein concentration, protein constituent fractions, the level of osmolality, and trace element concentrations were measured and compared with the same characteristics of four serum lubricants that were frequently used in simulator wear testing to mimic synovial fluid. In vitro investigations were conducted to explore the effects of some major constituents of the serum lubricants on the wear rate using a knee simulator apparatus. Increased protein constituent degradation led to increased wear. Such findings suggested that a protein layer acted as a boundary lubricant to protect the PE surfaces of knee implants. The protein constituent fractions of alpha calf serum (ACS) were similar to those measured for synovial fluid. These ACS lubricants were used in further wear studies in which hyaluronic acid (HA) and phosphate buffer solution (PBS) were successively added. The PBS was used in place of the distilled water to generate a serum lubricant with a clinically relevant level of osmolality. The thermal stability of the ACS lubricants and synovial fluid were measured. The thermal stability of the ACS lubricant that contained HA and PBS was about the same as that of human synovial fluid. The simulator wear rate of PE was significantly influenced by both HA and PBS. In further investigations, sodium azide, which has been used to inhibit microbial growth in simulator wear testing, was shown to be highly ineffective. Microbial contamination was recognized and the organism responsible was identified using standard microbiological methods. The use of an antibiotic-antimycotic mixture as the microbial inhibitor in the ACS + PBS + HA lubricant created a sterile environment and thus very clinically relevant environment for wear testing. The content of this thesis represents a comprehensive data collection on retrieval analysis and lubricant-specific knee simulator wear testing of modular total knee replacements. A more clinically relevant lubricant composition for simulator wear testing was proposed (U.S. patent Serial number 60/899,894; pending since February 9th, 2007) that improved upon the current guideline from the International Standards Organization for knee simulator wear testing. The present thesis should serve as a guide for the surgeon, researcher and the implant manufacturer to evaluate retrieved implant components and to select lubricant additives for wear testing that closely mimics the in vivo wear conditions.