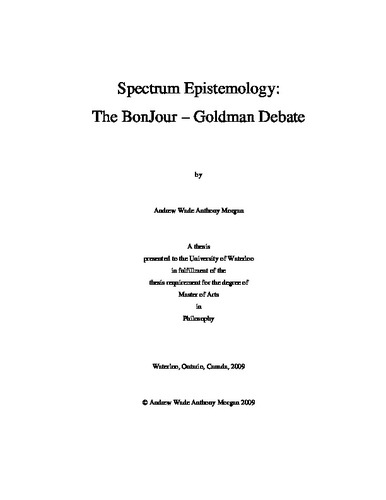 Socrates teaches in the Meno that in order for a belief to be justified, an appropriate relation must ‘tie down’ the belief to its (apparent) truth. Alvin Goldman’s position of externalism holds that for a belief to be justified, an appropriately reliable process must have obtained. One need not be aware of this reliable process. Conversely, Laurence BonJour’s brand of internalism holds that this relation between a belief and its (apparent) truth is just what the cognizer needs to be aware of in order for that belief to be justified. This work examines their debate, with particular interest paid to BonJour’s case of Norman: a clairvoyant who forms a belief via this ability but has no evidence for or against the belief or his own clairvoyance. Using this case, I propose an ‘epistemological spectrum’ wherein the insight of externalism is appreciated – what Robert Brandom deems the Founding Insight of Reliabilism – that a reliably produced belief bears some epistemic legitimacy, while retaining the insight of internalism: that objective reliability cannot offset subjective irrationality. This is done by classifying cases wherein only the obtainment of a reliable process occurs as epistemically rational, though not justified. Ultimately I reconcile the virtues of both positions, and propose that Goldman’s brand of full blooded externalism was generated by following an intuitional illusion by way of affirming the consequent.