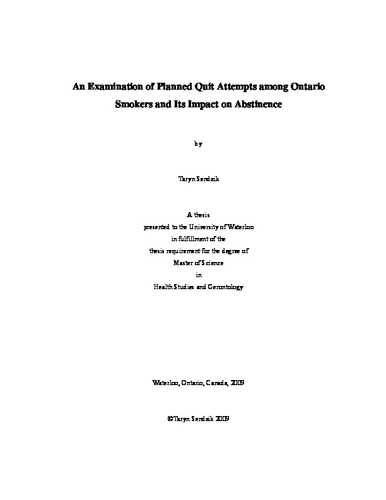 Background: Planning has long been assumed to be an important element of any successful quit smoking strategy. However, recent research findings indicate that unplanned, or spontaneous quit attempts, may lead to more successful and longer cessation periods than planned attempts. This calls into question continued advice to plan and the validity of planning based behaviour change theories. Objectives: To: 1) assess the prevalence of planning; 2) identify the attributes of planners; 3) examine the association of planning and intentions to quit; 4) examine the association of planning and use of quit aids; and 5) examine the impact of planning on smoking cessation outcomes. Methods: Data from the longitudinal Ontario Tobacco Survey (OTS) were examined. Analyses consisted of 418 smokers who made a planned or unplanned quit attempt between their waves 4 and 5 survey response. Descriptive, bivariate, and multivariate analyses were conducted using specialized survey analysis procedures to account for the complex sampling and design features of the OTS. Multiple Imputation (MI) was used to fill in missing data to reduce bias. Results: The prevalence of planning among Ontario smokers who made a quit attempt in the past six months was 70%. Regression models indicated that women, smokers who felt that it would be “very hard to quit”, and those with intentions to quit in the next 6 months had higher odds of making a planned quit attempt. Individuals who made a planned quit attempt had increased odds for using a quit aid compared to those making unplanned attempts. Univariate regression models indicated that planned attempts did not result in higher odds ratios for being abstinent for at least one week and at least one month. Conclusions: The present results suggest that a majority of smokers who made a quit attempt did so with a plan. Planned quit attempts had higher odds use of any quit aid compared with unplanned attempts. Planning was not found to increase the odds of being abstinent compared to unplanned attempts. Although more research is needed, the current study contributes to the dialogue of planning and smoking cessation.

Taryn Sendzik (2009). An Examination of Planned Quit Attempts among Ontario Smokers and Its Impact on Abstinence. UWSpace. http://hdl.handle.net/10012/4271