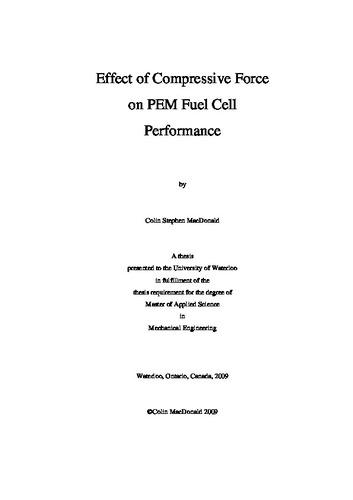 Polymer electrolyte membrane (PEM) fuel cells possess the potential, as a zero-emission power source, to replace the internal combustion engine as the primary option for transportation applications. Though there are a number of obstacles to vast PEM fuel cell commercialization, such as high cost and limited durability, there has been significant progress in the field to achieve this goal. Experimental testing and analysis of fuel cell performance has been an important tool in this advancement. Experimental studies of the PEM fuel cell not only identify unfiltered performance response to manipulation of variables, but also aid in the advancement of fuel cell modelling, by allowing for validation of computational schemes. Compressive force used to contain a fuel cell assembly can play a significant role in how affectively the cell functions, the most obvious example being to ensure proper sealing within the cell. Compression can have a considerable impact on cell performance beyond the sealing aspects. The force can manipulate the ability to deliver reactants and the electrochemical functions of the cell, by altering the layers in the cell susceptible to this force. For these reasons an experimental study was undertaken, presented in this thesis, with specific focus placed on cell compression; in order to study its effect on reactant flow fields and performance response. The goal of the thesis was to develop a consistent and accurate general test procedure for the experimental analysis of a PEM fuel cell in order to analyse the effects of compression on performance. The factors potentially affecting cell performance, which were a function of compression, were identified as: sealing and surface contact, pressure drop across the flow channel, porosity of the GDL. Each factor was analysed independently in order to determine the individual contribution to changes in performance. An optimal degree of compression was identified for the cell configuration in question and the performance gains from the aforementioned compression factors were quantified. The study provided a considerable amount of practical and analytical knowledge in the area of cell compression and shed light on the importance of precision compressive control within the PEM fuel cell.