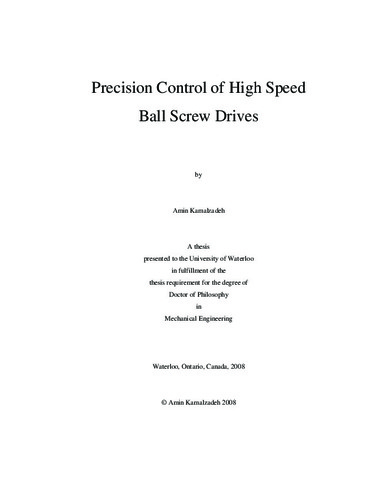 Industrial demands for higher productivity rates and more stringent part tolerances require faster production machines that can produce, assemble, or manipulate parts at higher speeds and with better accuracy than ever before. In a majority of production machines, such as machine tools, ball screw drives are used as the primary motion delivery mechanism due to their reasonably high accuracy, high mechanical stiffness, and low cost. This brings the motivation for the research in this thesis, which has been to develop new control techniques that can achieve high bandwidths near the structural frequencies of ball screw drives, and also compensate for various imperfections in their motion delivery, so that better tool positioning accuracy can be achieved at high speeds. A precision ball screw drive has been designed and built for this study. Detailed dynamic modeling and identification has been performed, considering rigid body dynamics, nonlinear friction, torque ripples, axial and torsional vibrations, lead errors, and elastic deformations. Adaptive Sliding Mode Controller (ASMC) is designed based on the rigid body dynamics and notch filters are used to attenuate the effect of structural resonances. Feedforward friction compensation is also added to improve the tracking accuracy at velocity reversals. A bandwidth of 223 Hz was achieved while controlling the rotational motion of the ball screw, leading to a servo error equivalent to 1.6 um of translational motion. The motor and mechanical torque ripples were also modeled and compensated in the control law. This improved the motion smoothness and accuracy, especially at low speeds and low control bandwidths. The performance improvement was also noticeable when higher speeds and control bandwidths were used. By adding on the torque ripple compensation, the rotational tracking accuracy was improved to 0.95 um while executing feed motions with 1 m/sec velocity and 1 g acceleration. As one of the main contributions in this thesis, the dynamics of the 1st axial mode (at 132 Hz) were actively compensated using ASMC, which resulted in a command tracking bandwidth of 208 Hz. The mode compensating ASMC (MC-ASMC) was also shown to improve the dynamic stiffness of the drive system, around the axial resonance, by injecting additional damping at this mode. After compensating for the lead errors as well, a translational tracking accuracy of 2.6 um was realized while executing 1 m/sec feed motions with 0.5 g acceleration transients. In terms of bandwidth, speed, and accuracy, these results surpass the performance of most ball screw driven machine tools by 4-5 times. As the second main contribution in this thesis, the elastic deformations (ED) of the ball screw drive were modeled and compensated using a robust strategy. The robustness originates from using the real-time feedback control signal to monitor the effect of any potential perturbations on the load side, such as mass variations or cutting forces, which can lead to additional elastic deformations. In experimental results, it is shown that this compensation scheme can accurately estimate and correct for the elastic deformation, even when there is 130% variation in the translating table mass. The ED compensation strategy has resulted in 4.1 um of translational accuracy while executing at 1 m/sec feed motion with 0.5 g acceleration transients, without using a linear encoder. This result is especially significant for low-cost CNC (Computer Numerically Controlled) machine tools that have only rotary encoders on their motors. Such machines can benefit from the significant accuracy improvement provided by this compensation scheme, without the need for an additional linear encoder.