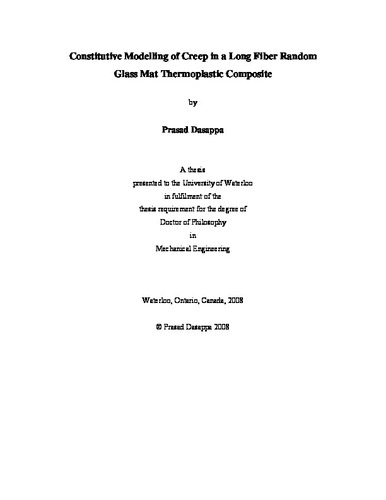 Random Glass Mat Thermoplastic (GMT) composites are increasingly being used by the automotive industry for manufacturing semi-structural components. The polypropylene based materials are characterized by superior strength, impact resistance and toughness. Since polymers and their composites are inherently viscoelastic, i.e. their mechanical properties are dependent on time and temperature. They creep under constant mechanical loading and the creep rate is accelerated at elevated temperatures. In typical automotive operating conditions, the temperature of the polymer composite part can reach as high as 80°C. Currently, the only known report in the open literature on the creep response of commercially available GMT materials offers data for up to 24 MPa at room temperature. In order to design and use these materials confidently, it is necessary to quantify the creep behaviour of GMT for the range of stresses and temperatures expected in service. The primary objective of this proposed research is to characterize and model the creep behaviour of the GMT composites under thermo-mechanical loads. In addition, tensile testing has been performed to study the variability in mechanical properties. The thermo-physical properties of the polypropylene matrix including crystallinity level, transitions and the variation of the stiffness with temperature have also been determined. In this work, the creep of a long fibre GMT composite has been investigated for a relatively wide range of stresses from 5 to 80 MPa and temperatures from 25 to 90°C. The higher limit for stress is approximately 90% of the nominal tensile strength of the material. A Design of Experiments (ANOVA) statistical method was applied to determine the effects of stress and temperature in the random mat material which is known for wild experimental scatter. Two sets of creep tests were conducted. First, preliminary short-term creep tests consisting of 30 minutes creep followed by recovery were carried out over a wide range of stresses and temperatures. These tests were carried out to determine the linear viscoelastic region of the material. From these tests, the material was found to be linear viscoelastic up-to 20 MPa at room temperature and considerable non-linearities were observed with both stress and temperature. Using Time-Temperature superposition (TTS) a long term master curve for creep compliance for up-to 185 years at room temperature has been obtained. Further, viscoplastic strains were developed in these tests indicating the need for a non-linear viscoelastic viscoplastic constitutive model. The second set of creep tests was performed to develop a general non-linear viscoelastic viscoplastic constitutive model. Long term creep-recovery tests consisting of 1 day creep followed by recovery has been conducted over the stress range between 20 and 70 MPa at four temperatures: 25°C, 40°C, 60°C and 80°C. Findley’s model, which is the reduced form of the Schapery non-linear viscoelastic model, was found to be sufficient to model the viscoelastic behaviour. The viscoplastic strains were modeled using the Zapas and Crissman viscoplastic model. A parameter estimation method which isolates the viscoelastic component from the viscoplastic part of the non-linear model has been developed. The non-linear parameters in the Findley’s non-linear viscoelastic model have been found to be dependent on both stress and temperature and have been modeled as a product of functions of stress and temperature. The viscoplastic behaviour for temperatures up to 40°C was similar indicating similar damage mechanisms. Moreover, the development of viscoplastic strains at 20 and 30 MPa were similar over all the entire temperature range considered implying similar damage mechanisms. It is further recommended that the material should not be used at temperature greater than 60°C at stresses over 50 MPa. To further study the viscoplastic behaviour of continuous fibre glass mat thermoplastic composite at room temperature, multiple creep-recovery experiments of increasing durations between 1 and 24 hours have been conducted on a single specimen. The purpose of these tests was to experimentally and numerically decouple the viscoplastic strains from total creep response. This enabled the characterization of the evolution of viscoplastic strains as a function of time, stress and loading cycles and also to co-relate the development of viscoplastic strains with progression of failure mechanisms such as interfacial debonding and matrix cracking which were captured in-situ. A viscoplastic model developed from partial data analysis, as proposed by Nordin, had excellent agreement with experimental results for all stresses and times considered. Furthermore, the viscoplastic strain development is accelerated with increasing number of cycles at higher stress levels. These tests further validate the technique proposed for numerical separation of viscoplastic strains employed in obtaining the non-linear viscoelastic viscoplastic model parameters. These tests also indicate that the viscoelastic strains during creep are affected by the previous viscoplastic strain history. Finally, the developed comprehensive model has been verified with three test cases. In all cases, the model predictions agreed very well with experimental results.