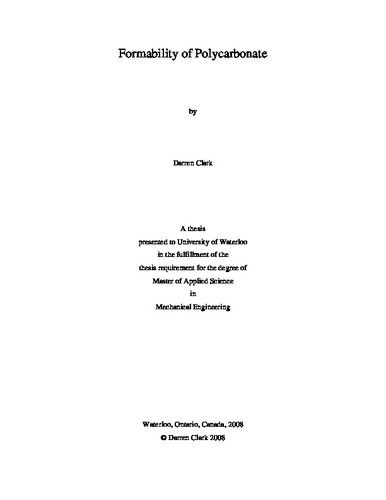 Current thermoplastic processing techniques involve high capital costs for moulds and significant use of energy to melt or soften the materials. Single-step process cold forming techniques, such as stretch forming, could be cost effective methods for manufacturing large parts with shallow cross-sections from plastic sheet. The present work is a preliminary investigation of a cold forming technique for polycarbonate. The objective of this work is to characterize the bulk deformation behaviour of polycarbonate using tensile tests and dome stretch forming tests. Two different molecular weight polycarbonate sheets with 1.6 mm thickness were studied: (i) one with Mw = 42,000 g/mol and (ii) the other with Mw = 52,000 g/mol. For the latter, 3.2 mm sheets were also studied. Tensile tests conducted at three different cross-head speeds, i.e., 2, 20 and 200 mm/min showed very similar elastic and plastic deformation properties for the two molecular weights. Correspondingly, the activation volumes at yield were almost identical. There was also negligible difference in the thermophysical properties between the two materials as found by differential scanning calorimetry. Dome stretch forming tests were conducted on a metal forming machine. Specimens of varying width were tested to give different strain states ranging from deep drawing to biaxial. The limiting dome height or the maximum level of stretch forming iv increases with specimen width. This is due to biaxial deformation which increases the maximum strain. Forming limit diagrams (FLDs) were also constructed from the local strains measured from printed fine circle grid patterns on the polycarbonate sheet surfaces. The FLDs showed common general characteristics with metals except for a few key differences. An area of very few data points was found to lie between the “safe zone” and the “necked zone”. This void was referred to as the “unstable neck formation zone”. It exists because of the large local increases in strain associated with the unstable nature of polymer neck formation. Much more study is required before polycarbonate can be cold formed at strains below the unstable neck deformation. However, the materials and techniques used in this work have demonstrated that the process can be viable for forming shallow large parts from relatively thin thermoplastic sheet a as long as the local biaxial strains are less than 20%.