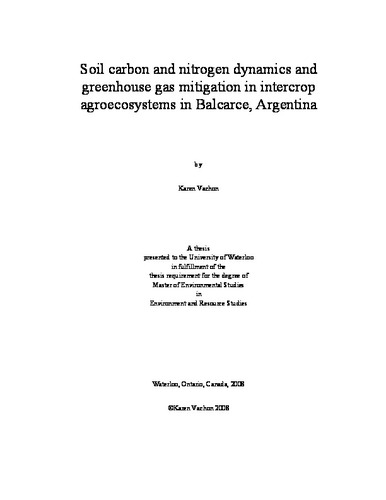 Through appropriate soil and crop residue management, soil can function as a sink for carbon (C) and nitrogen (N) for the mitigation of greenhouse gases (GHG). No research has yet investigated the potential of intercrop agroecosystems to reduce emissions of GHG to the atmosphere. This research evaluates whether maize-soybean intercrop agroecosystems sequester more C and N and emit fewer GHG than maize and soybean sole crop agroecosystems. An experiment was conducted at Balcarce, Argentina using four treatments: a maize sole crop, a soybean sole crop, and two intercrops with either 1:2 or 2:3 rows of maize to soybean. The objectives were to quantify soil organic carbon (SOC) and soil total nitrogen (TN) at 0-10, 10-20, 20-40, 40-80 and 80-120 cm depths, rates of decomposition of maize and soybean crop residue after 312 days, crop residue C- and N-input at harvest, and emissions of carbon dioxide (CO2), methane (CH4), and nitrous oxide (N2O). Significant decreases in SOC were observed with depth in all treatments after 40 cm, and significant decreases in TN were observed with depth in all treatments after 20 cm. Crop residue from maize had the greatest input of C and N to the soil, but the slowest rate of decomposition. Soybean biomass had the least input of C and N to the soil and the fastest rate of decomposition. The 1:2 and 2:3 intercrop agroecosystems had moderate crop residue inputs of C and N and intermediate rates of decomposition. No significant differences in GHG emissions were detected between treatments throughout the growing season. The major influences on GHG emissions were weather events, soil temperature and moisture, and crop residue input. Annual GHG emissions were determined; the CH4 sink in the 1:2 intercrop and the soybean sole crop was significantly greater (P < 0.05) than the 2:3 intercrop and the maize sole crop. Emissions of CO2 were inversely proportionate to N2O, with the greatest C sink in the 1:2 intercrop.