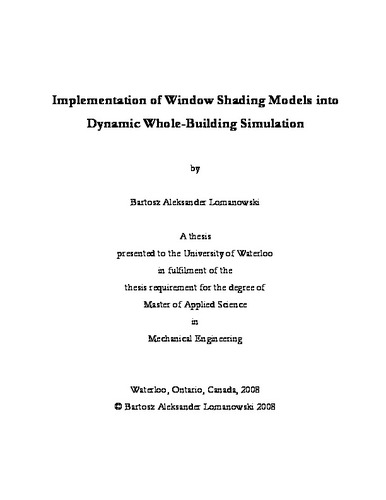 An important consideration in energy efficient building design is the management of solar gain, as it is the largest and most variable gain in a building. The design of buildings with highly glazed facades, as well as decreased energy transfer rates through better insulated and tighter envelopes are causing interior spaces to become highly sensitive to solar gain. Shading devices such as operable slat-type louver blinds are very effective in controlling solar gain, yet their impact on peak cooing loads and annual energy consumption is poorly understood. With the ever-increasing role of building energy simulation tools in the design of energy efficient buildings, there is a clear need to model windows with shading devices to assess their impact on building performance. Recent efforts at the University of Waterloo’s Advanced Glazing Systems Laboratory (AGSL) in window shading research have produced a set of flexible shading models. These models were developed with emphasis on generality and computational efficiency, ideally suited for integration into building simulation. The objective of the current research is to develop a complex fenestration facility within a general purpose integrated building simulation software tool, ESP-r, using the AGSL shading models. The strategy for implementation of the AGSL shading models is the addition of a new multi-layer construction within ESP-r, the Complex Fenestration Construction (CFC). The CFC is based on the standard ESP-r multi-layer nodal structure and finite control volume numerical model, with additional measures for coping with the complexities that arise in the solar, convective and radiant exchanges between glazing/shading layers, the interior zone and exterior surroundings. The CFC algorithms process the solar, convective and radiant properties of the glazing/shading system at each time-step, making it possible to add control (e.g., changing the slat angle of a slat-type blind) at the time-step level. Thermal resistances of sealed cavities between glazing/shading layers are calculated at each time-step for various fill gases and mixtures. In addition to modeling glazing/shading layer combinations, the CFC type also provides an alternate method of modeling unshaded windows without relying on third party software to supply the solar optics and cavity resistances. To build confidence in the CFC code implementation, two comparison studies were carried out to compare the CFC type against other models. The first study compared the CFC models for unshaded windows with the standard ESP-r transparent multi-layer construction (TMC) models. The second study compared the CFC slat-type blind models with EnergyPlus 2.0. Good agreement was seen in the simulation results in both studies. The successful implementation of the Complex Fenestration Construction within ESP-r has been demonstrated in the current research. In order for ESP-r users to fully exploit the capabilities of the CFC framework, it is recommended that the current models be extended to include a facility for dynamic shading control as well as the treatment of other types of shading layers. The coupling of daylighting models with the CFC type would provide a useful tool for modeling luminance control in combination with shading control strategies. With these enhancements, it is anticipated that the CFC implementation will be of significant value to practitioners.