From Objects to Individuals: An Essay in Analytic Ontology 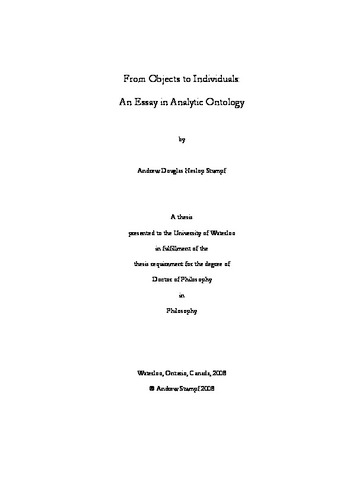 The brief introductory chapter attempts to motivate the project by pointing to (a) the intuitive appeal and importance of the notion of an object (that is, a “paradigmatic” individual), and (b) the need – for the sake of progress in at least two important debates in ontology – to replace this notion with a series of related notions of individuals of different sorts. Section One of Chapter Two aims to accomplish two primary tasks. The first is to clarify the intensions of three often employed but ambiguous categorical terms: ‘individual’, ‘particular’ and ‘object’, with emphasis on the third, which is often taken to be of particular philosophical significance. I carry out this clarificatory task by weighing various positions in the literature and arguing for explications of each notion that are maximally economical and neutral, that is, explications which (a) overlap as little as possible with other important ontological notions and (b) do not require us to take a stand on any apparently intractable (but not directly relevant) debates (e.g. on the problem of realism vs. nominalism about universals). The second task of 2.1 is to delineate the various ontological distinctions that will be turned, in Chapter Four, into the “dimensions” of which the ontological framework I will be advocating there is composed. The delineation of these distinctions takes place naturally in the course of attempting to characterize the notion of an object (an intrinsically unified, independent concrete particular) and to distinguish it from the notions of an individual and a particular, in spite of the fact that objects are both individuals and particulars. In the second section of Chapter Two I illustrate the centrality of the notion of an object in Ontology by showing how that notion figures in the debate over the existence of artifacts. I argue that progress in this debate has been hindered by the way it has been framed, and that seeing the issue as concerning not whether artifacts exist but whether artifacts are objects (in the sense outlined in 2.1) enables us to better appreciate and accommodate the different perspectives of the debate’s participants. At the same time, this way of dissolving the dispute makes clear that existence is not limited to entities that fall under the relevant concept of an object, foreshadowing the pluralistic ontological framework to be developed in Chapter Four. Chapter Three pronounces on a second debate in ontology, in which three positions concerning the correct ontological assay of the class of intrinsically unified independent concrete particulars (objects) are in competition with each other. My conclusion is that none of the three positions succeeds, since each faces fairly serious difficulties. I suggest that the (or at least one major) root of our inability to locate the correct ontological assay is the inclination to treat all ontologically significant entities as objects in the indicated sense, and the corresponding inclination to attempt to give an ontological assay that covers all objects, neglecting important differences between distinct types of individuals. Chapter Four begins by displaying in greater detail the considerations (canvassed very briefly in the introductory chapter) that make the notion of an object appear to be indispensible. However, the results of the second section of Chapter Two and of the entirety of Chapter Three have already shown two areas in which the notion of an object tends to lead to confusion. So a tension emerges between the prima facie necessity of the notion and the reasons we have found for thinking that this notion either is itself problematic or at least tends to cause problems for other issues in Ontology. The remainder of Chapter Four consists in explaining my strategy for moving forward. Briefly, this strategy involves replacing the notion of an object with a series of concepts applicable to individuals of various types. Each of the components belonging to a given “individual-concept” is drawn from one or another side of one of the ontological distinctions that together form an overall ontological framework, and which components are involved is a matter to be determined by examining the conceptual demands imposed by the various practices (explanatory or otherwise) which we engage in, that require us to appeal to individuals of the type in question. The resulting “pluralistic” ontological framework provides a way of situating and relating types of individuals that both avoids the confusions that the single general concept of an object leads to, and is capable of indicating the varying degrees of “ontological robustness” or “object-like-ness” of any given type of individual. I conclude by suggesting how the framework I am advocating can be elaborated on and put to use in further research.