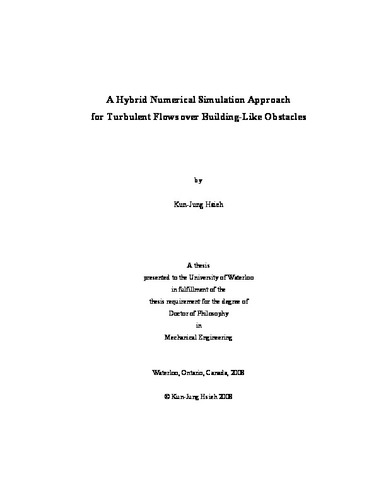 Computational fluid dynamics (CFD) has been widely applied to simulate turbulent flows in an urban environment. The two basic methodologies in CFD that have been applied here are a Reynolds-averaged Navier-Stokes (RANS) modeling and a large-eddy simulation (LES). The nature of the flow in a built-up urban area consisting of an arbitrary aggregation of buildings is dominated by unsteady large-scale turbulent structures. Recognizing that RANS is unable to correctly capture these turbulent structures while LES is associated with high computational costs, a hybrid RANS/LES methodology that combines the computational efficiency of RANS with the predictive accuracy of LES can be a promising simulation approach for the application to urban flows. In the non-zonal approach of hybrid RANS/LES methodology, a single generalized turbulence model is used in the entire computational domain. This model can function as a RANS turbulence closure model or as a LES subgrid scale model, depending on the local grid resolution or flow properties. A variant of non-zonal approaches, referred as partially resolved numerical simulation (PRNS) in this study, obtains the generalized turbulence model from the rescaling of a conventional RANS model through the incorporation of a resolution control function (F_R). The resolution control function F_R is used to characterize the degree of modeling required to represent the unresolved scales of motion. A new generalized functional form for F_R in PRNS is proposed in this thesis. The predictive performance of PRNS is compared with unsteady RANS (URANS) and LES computations, for a plane channel flow, and for fully-developed and developing flows over a matrix of cubes resembling a group of buildings. It is demonstrated that PRNS behaves similarly to LES, in terms of the predictions of the mean flow and turbulence, but outperforms URANS in general. This indicates PRNS is a promising approach for the simulation of complex turbulent flows in an urban environment.