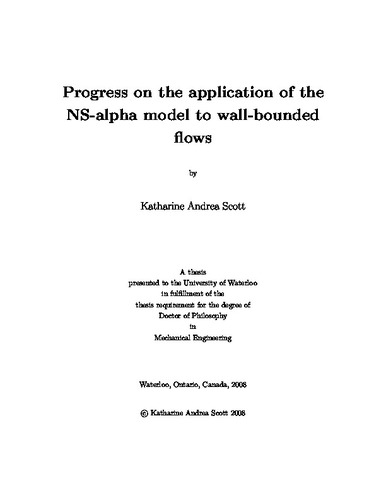 In this thesis we study the NS-alpha model of flow turbulence. In this model the closure arises through a modified nonlinearity. For the NS-alpha model currently used in published numerical studies, the parameter representing turbulent fluctuations, alpha, is a scalar and is assumed to be a constant. This corresponds to homogeneous, isotropic fluctuations. In this thesis we investigate the NS-alpha model for the more practical situation where fluctuations may be inhomogeneous and anisotropic. We begin by reviewing the derivation of the governing equations using Hamilton's principle. This is followed by the formulation of a subgrid model, where the dependent variable is the smoothed velocity. The isotropic and anisotropic subgrid models are then tested on a recirculating cavity flow and a fully turbulent channel flow. Initial tests used a simple definition of the model parameter based on the grid size. Two specific problems with the model in these test cases were isolated and addressed. For the cavity flow we found abrupt changes in the model parameter at the solid boundary led to numerical oscillations. To overcome this problem an alternative definition was proposed and found to produce improved turbulence statistics. For the channel flow, interaction between the model and the velocity streaks near the wall led to high skin friction. A damping factor through the streak-affected region removed this problem.

Katharine Andrea Scott (2008). Progress on the application of the NS-alpha model to wall-bounded flows. UWSpace. http://hdl.handle.net/10012/4087