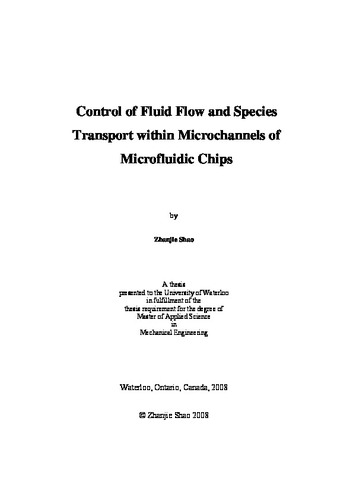 Microfluidic chips have drawn great attention and interest due to their broad applications in chemical, biological and biomedical fields. These kinds of miniaturized devices offer many advantages over the traditional analysis instruments, such as reduced cost, shortened time, increased throughput, improved integration/automation/portability, etc. However, the concept of integrating multiple labs on a single chip to perform micro total analysis hasn’t been realized yet because of the lack of fundamental knowledge and systematic design of each component, especially for some particular applications. A thorough understanding and grasp of the basic physical phenomenon is the theoretical basis to develop functional devices to utilize them. In this study, we intend to investigate the electrokinetic fluid flow and coherent species transport processes in microchannels, and then try to effectively control them for designing related lab-on-a-chip devices. Rather than expensive experiments, numerical studies are performed to simulate the different processes involved in various electrokinetic chip applications. In the theoretical models, applied potential field, flow field and species concentration field are considered and corresponding governing equations with initial/boundary conditions are numerically solved by computational fluid dynamics techniques. The flow field is obtained by the developed SIMPLE algorithm and a slip-wall velocity boundary condition is applied in simulating electroosmotic flow. Grid independence tests and convergence studies are performed to ensure economic computation with adequate accuracy and stability. For every application with typical channel layout, parametric studies are performed to investigate different effects through the controlling parameters linked to them. For surface patterning or microfabrication using laminar flows, various operational parameters are investigated to explore the optimized configurations for multi-stream flow and mass transport control in cross-linked microchannels. Through a series of numerical simulations, it is found that applied potentials, electroosmotic mobilities of solutions and channel dimensions have significant effects on the flow and mass transport after converging in the intersection of channel network. Diffusion coefficient has less influence than the other parameters due to the presence of high Peclet number for such applications. For the microwashing with two different electrolyte solutions, a three-dimensional model is numerically solved to reveal the flow structure change. In a straight microchannel with a rectangle cross section, KCl solution and LaCl3 solution are mainly employed for tests. Displacement processes between two solutions in both orders are tested and analyzed. The observed flow structures such as back flow in channel center and distortion of plug-like velocity profile are noticed and discussed. The distortion of the flow field results from the induced pressure gradient, which is due to the non-uniformity of electroosmotic mobilities and electrical conductivities of two replaced solutions. The bigger difference two solutions have in chemical properties, the stronger effects on flow they have. Effect of applied potential field strength is also studied and the approximate linear influences are concluded. Finally, the unsteady on-chip sample injection and separation processes involved in microchip capillary electrophoresis are studied. Species’ electrophoretic migration effect is included and the theoretical model is non-dimensionalized in a unique manner with the key fundamental parameters: the Re Sci , species’ non-dimensional electrophoretic mobility and applied potentials. The species transport characteristics are revealed numerically and well understood for future effective control and innovative chip design. Species front movement during injection and sample plug development in separation are examined with diffusion effect; results include concentration profiles and contour plots over a range of injection and separation time. The influence of i Re Sc which characterizes the relative role of convection versus diffusion is examined over the commonly encountered range and the diffusion effect is found to have an essentially negligible effect. Through three species, the electrophoretic mobilities difference is demonstrated to be the reason for separation. Real-time monitoring of different species’ movements is performed for injection guidance.