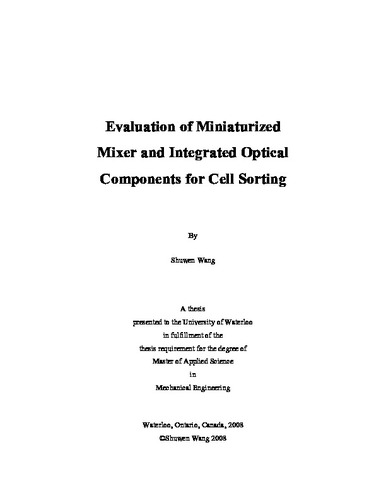 Conventional cell cytometers are often bulky and thus not convenient for bio-medical analysis where portable devices are desired. They also suffer from the drawback of high cost due to the complicated and expensive optical detection system involved. Therefore miniaturizing conventional cell cytometer is highly demanded as it offers an opportunity to transform the conventional bulky systems to more cost-efficient and portable microfluidic cell sorting devices. In addition to the advantages reduced cost and enhanced portability, microfluidic cell sorting devices require only a tiny amount of sample for analysis. In this thesis, one common microfluidic cell sorting device is developed using similar conventional functions and concepts but different sorting method. Unlike most of the conventional cell cytometers in which an electrical field or magnetic field is employed to deflect the charged target cells to the collecting container, microfluidic cell sorting devices use the fluid flow to control the movement of the targeted cells to the collecting reservoir. By using an electroosmitic pump, the response time of the flow switch is significantly lowered, leading to a much higher sorting efficiency. Despite the advantages of microfluidic cell sorting devices, there are some issues need to be addressed before realization of such devices. For example, more studies are required on the successful integration of the optical elements in the devices. In microfluidic, the transport phenomena is also different from that in macroscopic. Unlike that in macroscopic, surface forces are important in microfluidics. They result in pressure-induced flow which gives the parabolic profile of the velocity along the channel. Also, a plug-like velocity which is generated by the electoosmitic flow is required for the more controllable and accurate detection. To suppress the pressure-driven flow, hydro-resistance elements (Shallow channel network) are implemented on the microfluidic devices. Fabrication of optical elements by deposition of optical materials on glass or silicon wafer has been reported. However, this Micro Electro-Mechanical (MEM) technique requires special equipment and cleanroom facilities used in the semiconductor industry. A good alternative to the MEMS technique is soft lithography where optical elements can be created using polymers. In this work, ultraviolet-sensitive photo resists SU8 is used to fabricate the microfluidic cell sorting devices and the optical elements. By using the mask with the patterns of the microchannel network and optical elements, the optical elements can be fabricated with the microchannel, eliminating the problem of alignment. Experiments are also conducted to evaluate the integrated optical elements. To prevent cross-contamination, samples are usually prepared and are only mixed inside the microfluidic devices by the embedded mixers. Such embedded mixers, however, pose a great challenge as the small characteristic length of a microfluidic device tends to give a laminar flow and diffusion-dominated mixing. A simple passive micromixer is investigated to find the possibilities to integrate it to the microfluidic devices. To truly understand the diffusional mixing, a Y channel mixer is studied through the numerical and experimental investigations. Based on the results found, a possible design is also proposed and evaluated by experiments.