The Influence of Home Energy Management Systems on the Behaviours of Residential Electricity Consumers: An Ontario, Canada Case Study 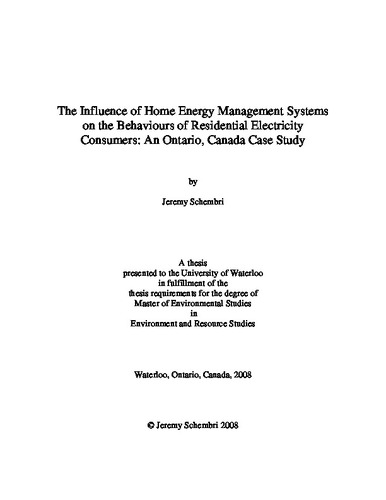 The current state of Ontario’s electricity system and natural environment has prompted the provincial government to call for the province to adopt a ‘culture of conservation.’ Answering this call will involve the promotion of a variety of solutions. Included in that will be the use of information and communication technology, which encompasses technologies such as home energy management system (HEMS). It is believed that the feedback and home automation features of the HEMS will enable its users to alter their electricity consumption behaviours, via net reductions and/or load shifting. This study has assessed the ability of HEMS to encourage reduction in total and on-peak electricity consumption while in a time-of-use pricing environment. Additional focus was on which consumers had the greatest success using the HEMS to adopt electricity conservation behaviours. Two hundred and sixteen participants of a Milton, Ontario HEMS pilot study were chosen to take part in this case study. These participants were divided into two equal groups: a sample group, those who received a HEMS, and a control group, those who did not receive a HEMS. Participants from both groups were asked to complete two surveys and allow their electricity consumption data to be analyzed. The initial survey was to establish some baseline information about the participants. The second survey was designed to determine if changes had occurred in the household since the initial baseline survey. Through the analysis of the survey and households electricity consumption data, conclusions were drawn on how participants used the HEMS. The study had a 2.9% relative reduction in total electricity consumption and a 13.2% relative reduction in on-peak electricity consumption. However, additional analysis of the results revealed promising findings with regard to the HEMS ability to catalyze conservation and demand management among recent time-of-use pricing adopters.