Development, Validation, and Application of a Multidimensional Definition of Healthy Aging 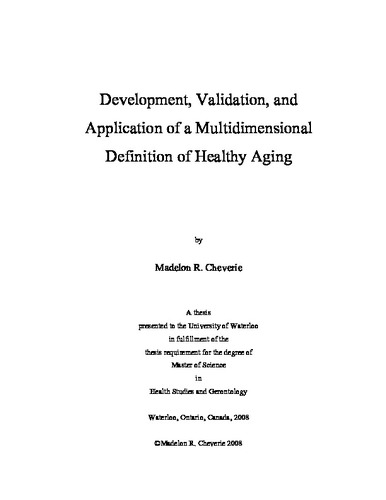 The progressive aging of the population corresponds with a movement in gerontology focusing on factors that promote the positive aspects of aging. The concept of healthy aging corresponds with the multifaceted nature of health but few researchers have examined this concept using a multidimensional approach. The creation of a biopsychosocial definition of healthy aging draws on previous literature to determine important components and potential predictors. The major domains of this definition include physical, cognitive, social, and psychological health. Using cross-sectional and longitudinal data from the Manitoba Study of Health and Aging (MSHA), the purpose was to develop a multidimensional construct of healthy aging based on the four components outlined above. The association between each of the components and the overall construct of healthy aging was examined. A significant interaction was found between physical and cognitive health, indicating that each dimension of health must be assessed in the context of the other. The definition was validated against mortality and institutionalization. Overall healthy aging was significantly associated with future mortality and institutionalization. In addition, healthy aging was compared with the construct of self-rated health to investigate if they are separate constructs. Results indicated that they were overlapping constructs but each variable also had an independent effect on future mortality and institutionalization. Significant demographic predictors of healthy aging at time 2 included younger age and higher education. A greater number of chronic conditions; the presence of vascular factors such as high blood pressure, stroke, heart problems, and chest pain; the presence of neurological factors such as memory problems and nerve trouble; and the presence of other conditions such as chronic pain, eye and ear trouble, and foot problems were also associated with not meeting criteria for healthy aging at time 2. Overall the findings from this study provide support for the importance of a multidimensional definition of healthy aging that is distinct from the construct of self-rated health. The findings underscore the need to assess individual characteristics, such as age, sex, and education, when attempting to predict future health outcomes. A greater understanding of the factors that are associated with healthy aging may encourage opportunities to promote healthy aging. This research may have important implications for researchers, clinicians, and policymakers as they focus on improving quality of life for our aging population.