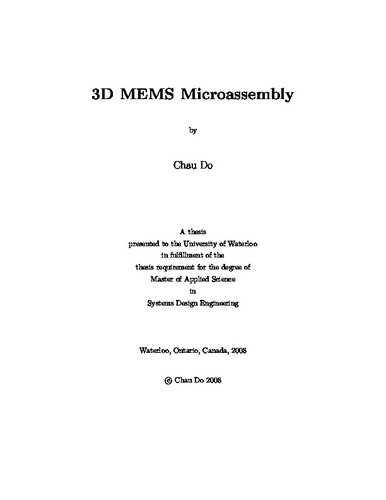 Due to the potential uses and advantages of 3D microelectromechanical systems (MEMS), research has been ongoing to advance the field. The intention of my reasearch is to explore different gripper designs and their interaction with corresponding components to establish a 3D microassembly system. In order to meet these goals, two grippers were designed using different mechanisms for grasping. At the same time, corresponding parts capable of being constructed into a 3D microstructure were designed to interact with the grippers. The microcomponents were fabricated using PolyMUMPS, a part of the Multi-User MEMS Processes (MUMPS), and experimentation was conducted with the goal of constructing a 3D microstructure. The results were partially successful in that both grippers were able to pick up corresonponding parts and bring them out of plane in order to make them stand up. However, a final 3D microstructure was unfortunately not achieved due to time constraints. This will be left to future researchers who continue the project. On the equpiment side a microassembly system was fully integrated using cameras for vision and motors with micro-resolution for movement. A computer program was used to control each part of the system. The cameras provided feedback from various views, allowing the operator to observe what was happening to the microcomponents. The grippers were attached to one of the motors and manipulated to pick up the parts. The final overall system proved sufficient for microassembly, but had some areas that could be improved upon.