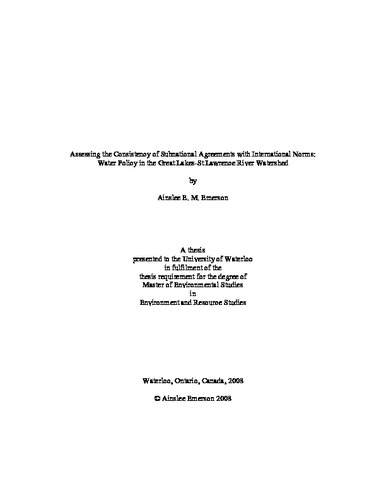 The purpose of this study is to assess whether the subnational water agreements that apply to the Great Lakes-St Lawrence River watershed are consistent with international norms and principles as articulated at United Nations conferences in Dublin, Ireland (1992) and Bonn, Germany (2001) and to establish the significance of these findings in the context of Ontario’s role in water management. The concepts of complex governance, decentralisation, internationalisation, norms, regimes and soft law contribute the theoretical bases, while a methodological approach of qualitative research, carried out using content analysis and a literature review, is utilised. The content analysis reveals that subnational policies for water management in the GLSLR watershed, as articulated in the Great Lakes Charter, the Great Lakes Charter Annex and the Great Lakes-St Lawrence River Basin Sustainable Water Resources Agreement, are consistent with international norms in many regards, with nearly identical language found in some areas, such as conservation and restoration of water resources and basin-level management. However, in the subnational agreements, there is a clear avoidance of some subjects closely tied to international norms, such as the unique roles and responsibilities of women, the urgent need for action, and the importance of indigenous knowledge. Furthermore, comparison among the three GLSLR water policies, which were developed over a twenty-year period, reveals that public participation became less prominent over time while this norm was strengthened at the international level. The roles and responsibilities of the federal government are discussed and it is proposed that, in the context of Canada-Ontario shared jurisdiction, the national government must establish national standards and policies. Ultimately, the inconsistencies between subnational GLSLR water policies and international norms are less significant than the notable consistencies, which are more remarkable given the weaknesses of the federal government’s role in water policy.