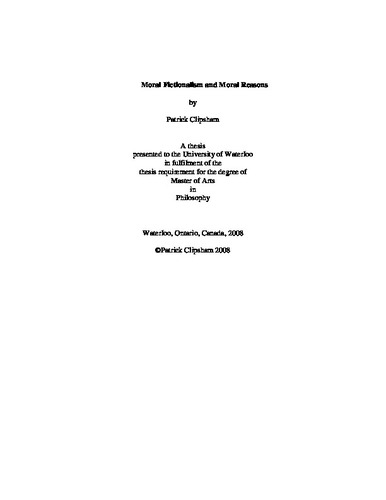 One major problem with moral discourse is that we tend treat moral utterances as if they represent propositions. But complex metaphysical problems arise when we try to describe the nature of the moral facts that correspond to these propositions. If moral facts do not exist, how can moralizers justify engagement in moral practice? One possibility is abolitionism; abandoning morality and growing out of our old habits. Another option that has been suggested is that morality be preserved as a useful fiction. Moral fictionalists propose that moralizers come to understand their moral beliefs as fictive precommitments that are instrumentally valuable. In this essay, I argue that this type of instrumentalist justification does not allow moralizers to have genuinely moral reasons for acting in accordance with their precommitments. The legislative function of morality and the concept of moral personhood cannot be supported by metaethical theories that only provide instrumental reasons for adopting moral discourse. Ironically, this implies that an instrumentalist moral society would not be able to preserve as many useful moral concepts as would a non-instrumentalist moral society. Since the fictionalists’ own criterion demands that they endorse the most instrumentally valuable metaethical theory, they cannot persuasively argue that their own metaethical alternative is viable. Fictionalists should, I argue, prefer a non-instrumentalist theory that preserves more of the functions of moral discourse, such as quasi-realism. The argumentative strategy employed by fictionalists is therefore self-undermining.