Can Induction Strengthen Inference to the Best Explanation? 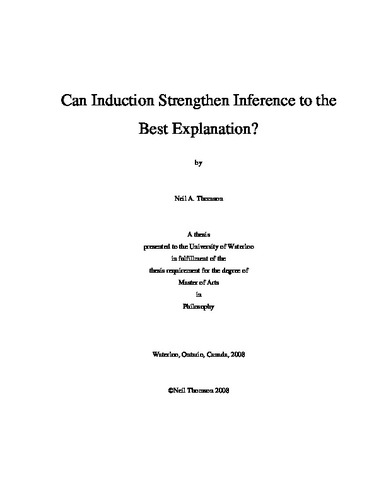 In this paper I will argue that the controversial process of inferring to the best explanation (IBE) can be made more coherent if its formulation recognizes and includes a significant inductive component. To do so, I will examine the relationship between Harman’s, Lipton’s, and Fumerton’s positions on IBE, settling ultimately upon a conception that categorically rejects Harman’s account while appropriating potions of both Lipton’s and Fumerton’s accounts. The resulting formulation will be called inductive-IBE, and I will argue that this formulation more accurately describes the inferential practices employed in scientific inquiry. The upshot of my argument, that IBE contains a significant inductive component, will be that any conclusion born from such types of inductive inference must be, at best, likely, and not a necessity. And, although previous accounts of IBE have accepted the defeasibility of IBE, I will argue that inductive-IBE is more descriptive because it tells us why this fallibility exists. That is, although the Liptonian conception of IBE acknowledges that IBE is fallible, my account specifically addresses this characteristic and, thus, is more descriptive and informative in this regard. I will use inductive-IBE to argue, contra van Fraassen, that IBE can be a legitimate form of inference that leads science to true theories and real entities.