Evaluation and Quantification of Engineered Flocs and Drinking Water Treatability 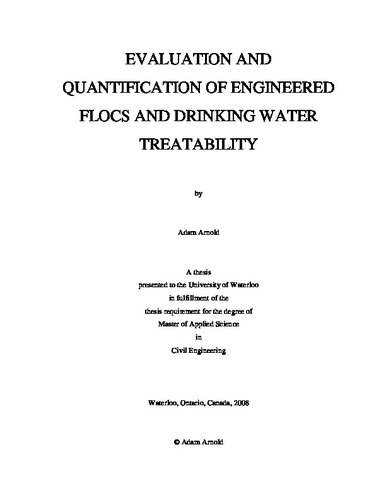 Jar tests are performed to simulate full-scale pre-treatment and particle removal processes. Operators typically conduct them in an effort to attempt alternative treatment doses and strategies without altering the performance of the full-scale drinking water treatment plant. However, information obtained from these tests must be evaluated judiciously, as they currently focus on reduction of specific water quality parameters (i.e., ultraviolet absorption at 254 nm (UV254) and turbidity), and measuring and understanding the significance of coagulant dose on floc size. Consideration of aggregate structure has been less explored due mainly to a lack of appropriate theories to describe the complex random floc structure. Improving the predictive capacity of bench-scale protocols commonly used for optimizing conventional chemical pre-treatment in full-scale drinking water treatment plants is required. Results from settling tests indicated that the production of larger and more settleable flocs could not be described by floc settling velocities and floc sizes. Settling velocities were not directly related to either UV254 or turbidity reductions. Results of the floc characterization tests indicated that measured values of UV254 and turbidity of the supernatant were generally inversely proportional to aggregate D90; that is, the residual UV254 and/or turbidity decreased as the value of D90 increased, which may have been indicative of flocculent settling. No direct relationship could be discerned between fractal dimension D1 (i.e., floc shape) and the UV254 and turbidity of the supernatant; however, the turbidity after flocculation and a period of settling appeared to be inversely proportional to fractal dimension D2 (i.e., porosity). Overall, the results of the experiments have demonstrated that grain size distributions and fractal dimensions might be used to assess and/or predict pre-treatment and/or particle removal performance. Specifically, the relationship between D90 values calculated from samples of flocculated water prior to settling and UV254 and turbidity values of that water after a period of settling may be a simple tool that can be utilized to describe and potentially better predict flocculent settling performance. At present, this appears to be the first such tool of its kind that has been reported.