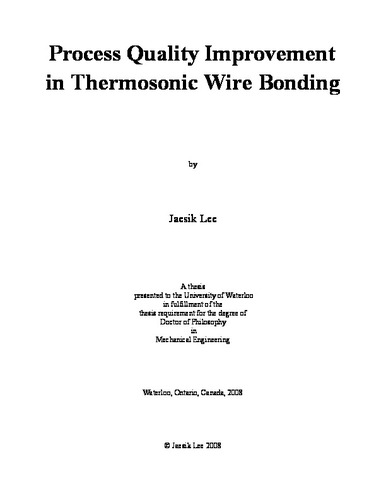 This thesis demonstrates the feasibility of methods developed to increase the quality of the crescent bond together with the tail bond quality. Low pull force of the crescent bond limits the usage of insulated Au wire in microelectronics assembly. Premature break of the tail which results in the stoppage of the bonding machine is one of obstacles to overcome for Cu wire. The primary focus of this thesis is to understand the tail and crescent bonding process and then to propose methodologies to improve thermosonic wire bonding processes when Cu and insulated Au wires are used. Several series of experiments to investigate the crescent and tail bonding processes are performed on auto bonders. Cu and insulated Au wires with diameters of 25mm are bonded on the diepads of Ag leadframes. For simplicity, wire loops are oriented perpendicular to the ultrasonic direction. It was found that the crescent bond breaking force by pulling the wire loop (pull force) with insulated Au wire is about 80 % of that of bare Au wire. A modification of the crescent bonding process is made to increase the pull force with insulated Au wire. In the modified process, an insulation layer removing stage (cleaning stage) is inserted before the bonding stage. The cleaning stage consists of a scratching motion (shift) toward to the ball bond in combination with ultrasound. Bonds are then made on the fresh diepad with the insulation removed from the contact surface of the insulated Au wire. This process increases the pull force of the crescent bond up to 26% which makes it comparable to the results obtained with bare Au wire. An online tail breaking force measurement method is developed with a proximity sensor between wire clamp and horn. Detailed understanding of tail bond formation is achieved by studying tail bond imprints with scanning electron microscopy and energy dispersive x-ray analysis. Descriptions are given of the dependence of the tail breaking force on the bonding parameters, metallization variation, and cleanliness of the bond pad. Simultaneous optimization with pull force and tail breaking force can optimize the Cu wire bonding process both with high quality and robustness. It is recommended to first carry out conventional pull force optimization followed by a minimization of the bonding force parameter to the lowest value still fulfilling the pull force cpk requirement. The tail bond forms not only under the capillary chamfer, but also under the capillary hole. The tail breaking force includes both the interfacial bond breaking strength and the breaking strength of the thinned portion of the wire that will remain at the substrate as residue. Close investigations of the tail bond imprint with scanning electron microscopy indicate the presence of fractures of the substrate indicating substrate material being picked up by Cu wire tail. Pick up is found on Au and Cu wires, but the amount of pick up is much larger on Cu wire. The effect on the hardness of the subsequently formed Cu free air ball (FAB) as investigated with scanning electron microscopy and micro - hardness test shows that Cu FABs containing Au and Ag pick ups are softer than those without pick up. However, the hardness varies significantly more with Au pick up. The amount of Au pick up is estimated higher than 0.03 % of the subsequently formed FAB volume, exceeding typical impurity and dopant concentrations (0.01 %) added during manufacturing of the wire.