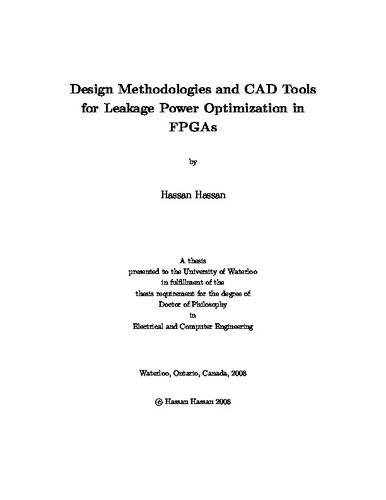 The scaling of the CMOS technology has precipitated an exponential increase in both subthreshold and gate leakage currents in modern VLSI designs. Consequently, the contribution of leakage power to the total chip power dissipation for CMOS designs is increasing rapidly, which is estimated to be 40% for the current technology generations and is expected to exceed 50% by the 65nm CMOS technology. In FPGAs, the power dissipation problem is further aggravated when compared to ASIC designs because FPGA use more transistors per logic function when compared to ASIC designs. Consequently, solving the leakage power problem is pivotal to devising power-aware FPGAs in the nanometer regime. This thesis focuses on devising both architectural and CAD techniques for leakage mitigation in FPGAs. Several CAD and architectural modifications are proposed to reduce the impact of leakage power dissipation on modern FPGAs. Firstly, multi-threshold CMOS (MTCMOS) techniques are introduced to FPGAs to permanently turn OFF the unused resources of the FPGA, FPGAs are characterized with low utilization percentages that can reach 60%. Moreover, such architecture enables the dynamic shutting down of the FPGA idle parts, thus reducing the standby leakage significantly. Employing the MTCMOS technique in FPGAs requires several changes to the FPGA architecture, including the placement and routing of the sleep signals and the MTCMOS granularity. On the CAD level, the packing and placement stages are modified to allow the possibility of dynamically turning OFF the idle parts of the FPGA. A new activity generation algorithm is proposed and implemented that aims to identify the logic blocks in a design that exhibit similar idleness periods. Several criteria for the activity generation algorithm are used, including connectivity and logic function. Several versions of the activity generation algorithm are implemented to trade power savings with runtime. A newly developed packing algorithm uses the resulting activities to minimize leakage power dissipation by packing the logic blocks with similar or close activities together. By proposing an FPGA architecture that supports MTCMOS and developing a CAD tool that supports the new architecture, an average power savings of 30% is achieved for a 90nm CMOS process while incurring a speed penalty of less than 5%. This technique is further extended to provide a timing-sensitive version of the CAD flow to vary the speed penalty according to the criticality of each logic block. Secondly, a new technique for leakage power reduction in FPGAs based on the use of input dependency is developed. Both subthreshold and gate leakage power are heavily dependent on the input state. In FPGAs, the effect of input dependency is exacerbated due to the use of pass-transistor multiplexer logic, which can exhibit up to 50% variation in leakage power due to the input states. In this thesis, a new algorithm is proposed that uses bit permutation to reduce subthreshold and gate leakage power dissipation in FPGAs. The bit permutation algorithm provides an average leakage power reduction of 40% while having less than 2% impact on the performance and no penalty on the design area. Thirdly, an accurate probabilistic power model for FPGAs is developed to quantify the savings from the proposed leakage power reduction techniques. The proposed power model accounts for dynamic, short circuit, and leakage power (including both subthreshold and gate leakage power) dissipation in FPGAs. Moreover, the power model accounts for power due to glitches, which accounts for almost 20% of the dynamic power dissipation in FPGAs. The use of probabilities in the power model makes it more computationally efficient than the other FPGA power models in the literature that rely on long input sequence simulations. One of the main advantages of the proposed power model is the incorporation of spatial correlation while estimating the signal probability. Other probabilistic FPGA power models assume spatial independence among the design signals, thus overestimating the power calculations. In the proposed model, a probabilistic model is proposed for spatial correlations among the design signals. Moreover, a different variation is proposed that manages to capture most of the spatial correlations with minimum impact on runtime. Furthermore, the proposed power model accounts for the input dependency of subthreshold and gate leakage power dissipation. By comparing the proposed power model to HSpice simulation, the estimated power is within 8% and is closer to HSpice simulations than other probabilistic FPGA power models by an average of 20%.