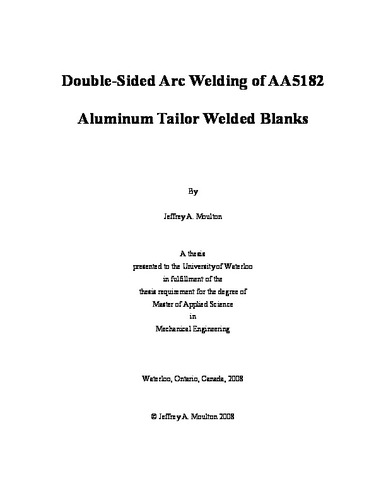 Increasing regulatory pressure to reduce fuel consumption of new vehicles has prompted the automotive industry to seek ways to reduce the weight of their automobiles. The use of steel tailor welded blanks has been successful in reducing vehicle weight while simultaneously reducing manufacturing costs; however, further weight reductions are possible if steel alloys are substituted with aluminum alloys. This has created a need to identify and develop welding techniques that would enable the production of high-quality welds between aluminum sheets of different thicknesses at rates compatible with the demands of the automotive industry. A relatively new welding technique that has been shown to have potential for joining aluminum sheet for tailor welded blank applications is the double-sided arc welding (DSAW) process. In DSAW, an arc is struck between two welding torches situated on either side of the sheets to be welded allowing the aluminum surface oxide to be electrically cleaned simultaneously from both sides of the joint. The demonstrated potential for welding aluminum sheet and the low capital cost compared to conventional laser welding systems typically used for fabricating TWBs makes DSAW an excellent candidate for welding aluminum TWBs. The objective of the research described in this thesis was to assess the feasibility and merits of using a DSAW system to manufacture aluminum TWBs. In this study, a DSAW system comprised of a plasma arc welding (PAW) torch above the work piece and a gas tungsten arc welding (GTAW) torch below the work piece was applied to the high speed welding of 1.0 to 1.5 mm thick AA5182-O aluminum alloy sheets in the butt-joint configuration. A series of conduction-mode DSAW welds were made in the horizontal position to identify the welding conditions that produced good quality welds using visual acceptance criteria and with minimal geometric discontinuity across the weld. Further studies were conducted to determine the influence of the welding process parameters on the hardness, strength, ductility, formability and internal flaws of DSAW welds. DSAW welds were made using a series of welding torch-to-work piece distances, between 1.5 and 6.0 mm, to investigate the influence of varying the relative arc forces acting on the top and bottom of the weld pool on the resulting weld bead dimensions including weld metal drop through. It was found that increasing the torch-to-work piece distance decreased the process efficiency when a constant welding power was used resulting in narrower welds being produced. Weld metal sag or drop through was not observed to be affected by varying the welding torch-to-work piece distance; however, decreasing the PAW torch-to-work piece distance to 1.5 mm was found to produce a pronounced surface ripple pattern on the top surface of the weld. A series of DSAW welds were made to investigate the range of welding speeds and powers that produced visually acceptable welds on 1.0 to 1.5 mm thick AA5182 aluminum sheets. Welding powers ranging from 1.4 to 4.6 kW were found to produce acceptable welds at travel speeds between 10 and 70 mm/s when the net heat input per unit distance was between 60 and 110 J/mm. Above these speeds, unacceptable weld bead quality and lack of fusion defects were observed due to incomplete cathodic etching of the oxide from the surfaces and inconsistent coupling between the welding arcs the sheets. It was found that the visual appearance of the weld was improved and travel speeds could be increased for a given welding power when welding specimens were stainless steel wire brushed prior to welding to break-up and remove most of the pre-existing hydrated aluminum surface oxide. Significant reductions in hydrogen gas porosity were also observed when stainless steel wire brushing was used. The strength, ductility and formability of DSAW welds were found to vary significantly depending on the welding parameters used and the occurrence of porosity defects in the welds. Welds made using welding speeds greater than 30 mm/s were found to exhibit solidification shrinkage micro-porosity and a corresponding degradation in mechanical properties, especially ductility and formability. As the welding speed was further increased, degradation of the material properties continued to increase due to an increase in the quantity of micro-porosity defects in the weld. These defects caused significant strain localization resulting in a marked decrease in ductility and formability. The severity of solidification shrinkage micro-porosity present in the weld metal was found to correspond to the relative length-to-width ratio of the weld pool for all the welding conditions examined. Welds produced at high welding speeds resulted in large length-to-width ratios, a relatively large distance between the liquidus and non-equilibrium solidus and low thermal gradients in the mushy zone at the tail of the weld. These conditions are known to promote micro-porosity in alloys with a wide freezing range. Visually acceptable DSAW welds produced using welding speeds below 25 mm/s were found to have excellent material properties that were nearly indistinguishable from the base metal with excellent ductility and formability. These welds had relatively small length-to-width ratios and little or no evidence of solidification micro-porosity, because the length of the mushy zone at the tail of the weld was much smaller and the thermal gradients were much higher. These conditions are known to prevent solidification micro-porosity during solidification of alloys with a wide freezing range. They also provide more time and opportunity for any hydrogen bubbles that may form during solidification to float up and escape through the top surface of the weld pool thereby further reducing the propensity for hydrogen porosity. The DSAW process has been shown to be capable of successfully producing tailor-welded blanks in 5182 aluminum alloy sheets with excellent ductility and formability provided that all sources of porosity are eliminated. This includes careful cleaning and removal of preexisting hydrated oxides using stainless steel wire brushing prior to welding to minimize hydrogen porosity and welding at slow enough speeds to prevent the formation of solidification micro-porosity at the tail of the weld pool.