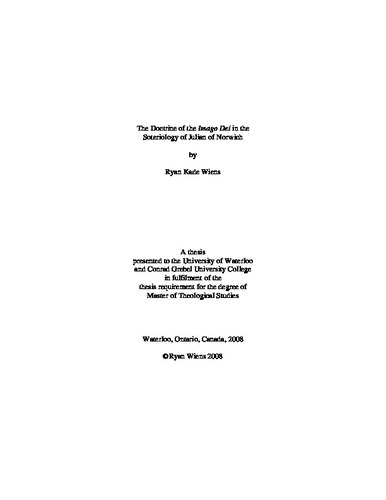 The soteriology of the English 14th century mystic Julian of Norwich moves in the direction of a hope for universal salvation. The ground for this hope is established through Julian’s appropriation of the doctrine of the soul’s creation in the image of God, the imago dei. Previous studies have primarily focussed on Augustine’s influence on Julian’s use of the imago dei doctrine. While this has been fruitful, in order to better grasp the nuances of Julian’s anthropology and soteriology, it is essential to also attend to Cistercian influences. In particular, William of St. Thierry’s notion of the will that remains godly in spite of sin and Aelred of Rievaulx’s writing on friendship provide important background to the development of Julian’s soteriology. Interestingly, Julian very rarely explicitly mentions the term image of God. However, in her use of the Middle English word kynd, Julian clearly invokes the doctrine of the imago dei. Further, the doctrine of the imago dei powerfully informs her imagination such that the trope of image may be seen behind important theological developments such as the correspondence between the human and the divine and her notions of what is potentially occurring in the process of contemplation. Close attention to the image tropes that structure Julian’s contemplation and her various usages of the word kynd reveals the complexity of Julian’s adaptation of the doctrine of the imago dei and elucidates the ground of her soteriology.