Abandoned Mid-Canada Radar Line Site 500 in the Western Hudson Bay region of sub-Arctic, Canada: A source of organochlorines for the people of Weenusk First Nation? 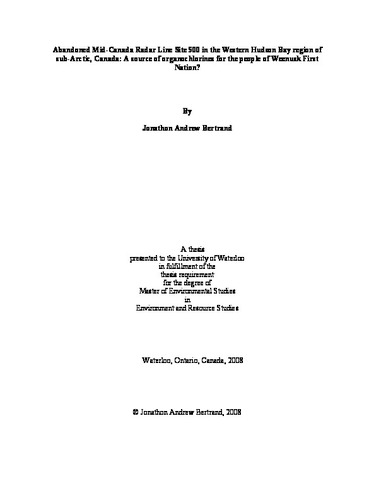 Interest in the presence of environmental contaminants in the Canadian arctic and sub-arctic arises in part over concerns that Aboriginal people residing in these regions continue to rely on subsistence harvesting. Organochlorines (OCs) are a type of persistent organic pollutant (POP) that have a unique chlorine-carbon bond; this bond facilitates their unprecedented environmental longevity, lipophilicity and hydrophobic nature. OCs have been found in both the biotic and non-biotic compartments of northern ecosystems. This study examined patterns of differences with respect to body burden of organochlorines (lipid-adjusted) between the residents of the Ontario First Nations of Fort Albany (the site of MCRL Site 050), Kashechewan (no radar site), and Peawanuck (the site of MCRL 500) to assess whether geo-proximity to abandoned radar sites influenced organochlorine body burden with respect to the people of Fort Albany and Peawanuck. Correspondence analysis (CA-1) revealed people from Fort Albany had relatively higher pesticide concentrations (β-HCH and DDT, but not Mirex) and relatively lower CB (156 and 170) body burdens when compared to participants from Kashechewan and Peawanuck. CA- 2 revealed Peawanuck residents had relatively higher concentrations of CB180, DDE and hexachlorobenzene and relatively lower levels of DDT and mirex compared to participants from Kashechewan and Fort Albany. Results are suggestive but not conclusive that MCRL Site 500 may have influenced body burdens of Peawanuck residents.