NAFTA and Virtual Water Trade: An estimation of virtual water trade in livestock and livestock products between Canada and the United States 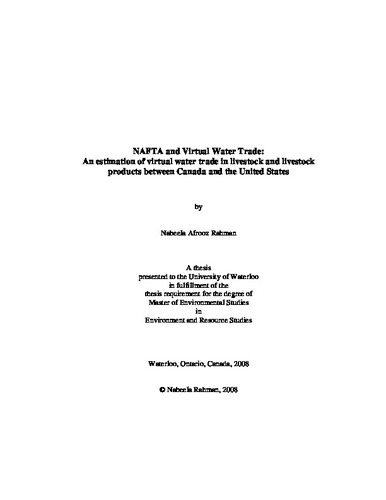 Canadian agriculture trade with the United States, specifically trade in livestock and livestock commodities, has flourished under the NAFTA regime. However, the benefits of this trade liberalization have hidden environmental costs that seldom get noticed or accounted. The purpose of this research was to evaluate the hidden cost on water resources by first assessing the virtual water content (VWC) of various types of livestock and livestock products and then quantifying the virtual water flow (VWF) related to trade in livestock and its products between Canada and United States. The study also examined the North American Free Trade Agreement (NAFTA) and evaluated its implications for Canadian water resources. The research was conducted in three parts. First, the background literature on NAFTA was studied and trade data were collected to understand the NAFTA regime and study the impacts on Canadian exports of livestock and livestock products from the 1990s. The trade data were collected from provincial agricultural ministries and Statistics Canada. Secondly, datasheets were created to calculate the VWC in the various categories of animals and ultimately to estimate VWF between the two countries. Finally, Alberta and Ontario were chosen as case study areas to investigate localized impacts on water resources due to trade under NAFTA. The research results indicate that there is a large difference in the amount of VW being transferred through livestock and livestock commodities from Canada to the U.S. The average difference in trade has been calculated to be 3.6 billion m3 per year. This makes Canada a net exporter of virtual water to the U.S. A closer look at the trade patterns reveals that the U.S. imports mostly water-intensive commodities like cattle and cattle commodities, while it exports mostly less-water intensive commodities like chicken and mutton. By eliminating numerous trade barriers, the agreement has allowed competitive market forces to play a more dominant role in determining agricultural trade flows between the two countries. NAFTA has been criticized and contested at different levels for encouraging bulk water export from Canada to the U.S. What has not received attention in this debate is that water is also being exported in other forms, i.e., the virtual form. The hidden environmental, costs (for the exporting countries) or benefits (to the importing countries) are not reflected in the pricing of agricultural commodities. NAFTA’s mandate for the expansion of trade and investment through the removal of all trade barriers between the two countries is encouraging increased VW trade. This trade, if overlooked, can have deleterious impacts on the water resources of Canada.