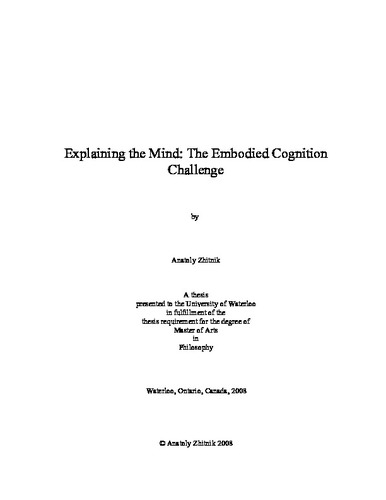 This thesis looks at a relatively new line of research in Cognitive Science – embodied cognition. Its relation to the computational-representational paradigm, primarily symbolicism, is extensively discussed. It is argued that embodied cognition is compatible with the established paradigm but challenges its research focus and traditionally assumed segregation of cognition from bodily and worldly activities Subsequently the impact of embodied cognition on philosophy of Cognitive Science is considered. The second chapter defends the applicability of mechanistic explanation to cases of embodied cognition. Further, it argues that a proposed alternative, dynamic systems theory, is not a substitute to the mechanistic approach. The last chapter critically examines the thesis that mind is extended beyond the bodily boundary and into the world. It is concluded that arguments in favour of the extended mind thesis are inadequate. Considerations in favour of the orthodox view that the does not “leak” out into the world are also presented.