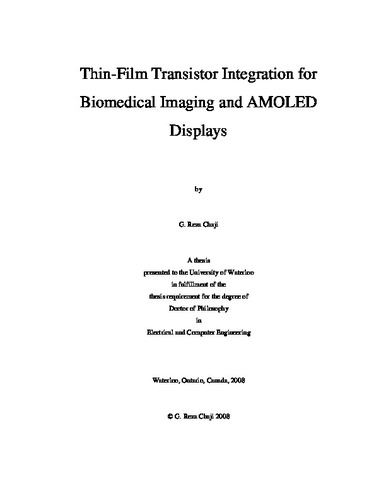 Thin film transistor (TFT) backplanes are being continuously researched for new applications such as active-matrix organic light emitting diode (AMOLED) displays, sensors, and x-ray imagers. However, the circuits implemented in presently available fabrication technologies including poly silicon (poly-Si), hydrogenated amorphous silicon (a-Si:H), and organic semiconductor, are prone to spatial and/or temporal non-uniformities. While current-programmed active matrix (AM) can tolerate mismatches and non-uniformity caused by aging, the long settling time is a significant limitation. Consequently, acceleration schemes are needed and are proposed to reduce the settling time to 20 µs. This technique is used in the development of a pixel circuit and system for biomedical imager and sensor. Here, a metal-insulator-semiconductor (MIS) capacitor is adopted for adjustment and boost of the circuit gain. Thus, the new pixel architecture supports multi-modality imaging for a wide range of applications with various input signal intensities. Also, for applications with lower current levels, a fast current-mode line driver is developed based on positive feedback which controls the effect of the parasitic capacitance. The measured settling time of a conventional current source is around 2 ms for a 100-nA input current and 200-pF parasitic capacitance whereas it is less than 4 μs for the driver presented here. For displays needed in mobile devices such as cell phones and DVD players, another new driving scheme is devised that provides for a high temporal stability, low-power consumption, high tolerance of temperature variations, and high resolution. The performance of the new driving scheme is demonstrated in a 9-inch fabricated display intended for DVD players. Also, a multi-modal imager pixel circuit is developed using this technique to provide for gain-adjustment capability. Here, the readout operation is not destructive, enabling the use of low-cost readout circuitry and noise reduction techniques. In addition, a highly stable and reliable driving scheme, based on step calibration is introduced for high precision displays and imagers. This scheme takes advantage of the slow aging of the electronics in the backplane to simplify the drive electronics. The other attractive features of this newly developed driving scheme are its simplicity, low-power consumption, and fast programming critical for implementation of large-area and high-resolution active matrix arrays for high precision.