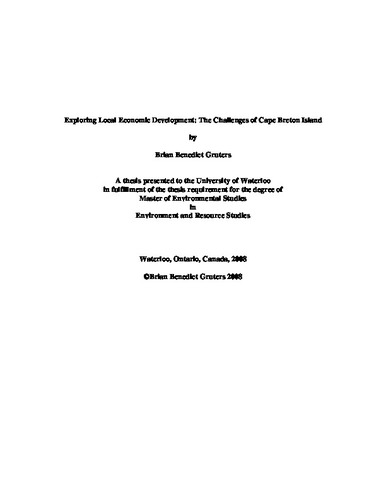 Economic development in the declining Maritime Provinces has proven to be an intractable problem over the last 70 years. Efforts have ranged from capitalist industrial resource extraction to worker-owned producer co-operatives. Yet, throughout its many variations, these initiatives have done little to secure the long-term economic security of Canada’s most marginalized rural communities, such as those on the western coast of Cape Breton Island. Efforts toward this end during the closing decades of the twentieth century, up to present date, have applied market-led development strategies paralleling trends in the increasingly fluid global market economy. This local economic development approach, it is argued, reinforces economic dependency established during the last century’s staples commodity extraction, even as it attempts to reduce it and promote communities’ unique socio-cultural values, through ‘local ownership’ of integration into the market economy. An analysis of conventional approaches to economic development and ‘local ownership’, that focuses on two communities in rural western Cape Breton, demonstrates this point. Several alternatives to conventional economic development are considered, with a particular emphasis on the two Cape Breton communities.